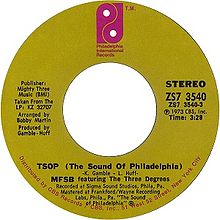 “TSOP (The Sound of Philadelphia)” is a 1974 hit recording by MFSB (Mother, Father, Sister, Brother) featuring vocals by The Three Degrees. A classic example of the Philadelphia soul genre, it was written by Kenneth Gamble and Leon Huff as the theme for the American musical television program Soul Train, which specialized in African-American musical performers. The single was released on the Philadelphia International label. It was the first television theme song to reach number one on the Billboard Hot 100, and it is arguably the first disco song to reach that position.