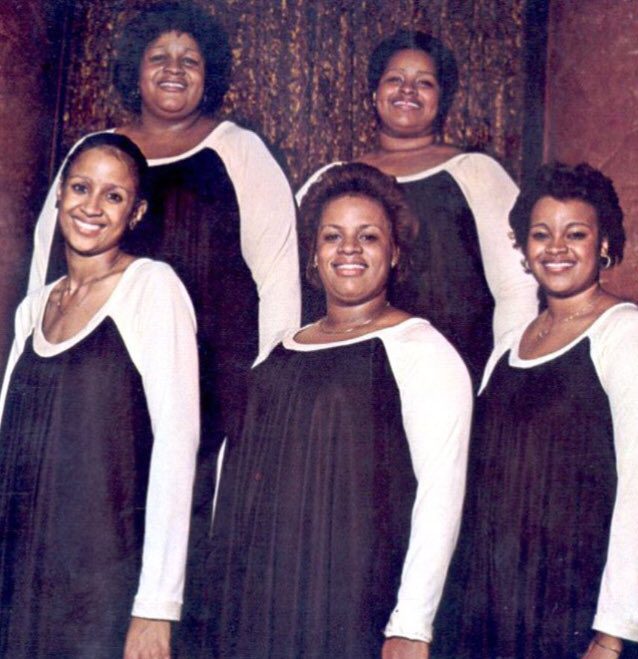 Born and raised in Detroit, Michigan, Jacky, Denise, Elbernita (Twinkie), Dorinda and Karen were born to the late, great Dr. Mattie Moss Clark. Dr. Mattie was known for her extraordinary musical ear and her gift touched the hearts and souls of masses of people, especially within the Church of God in Christ (COGIC), where she held the position as the international president of the COGIC music department . So, when she had five daughters, she instilled in them the fear and reverence of God and taught them to be focused on strengthening their gifts of singing-most importantly with an anointing, especially since she is credited with introducing three-part harmony to gospel arrangements, as well as being the first person to record a gospel choir.

By the late 60’s, the sisters were singing together in church services, ministering to all different groups of people with their beautiful voices. Dr. Mattie individually trained her girls in their voices and paid attention to Twinkie’s instrumental talents as well, and Twinkie became extremely proficient in playing the organ and piano. Dr. Mattie’s passion for music translated into her daughters, which allowed for her to culminate one of the most successful gospel groups of all time.

In 1973, following Dr. Mattie’s divorce to her physically abusive husband, she formally created “The Clark Sisters” and they recorded their first album on their uncle’s record label, Billesse Records. The next year, Dr. Mattie released, Dr. Mattie Moss Clark Presents the Clark Sisters, which got them noticed throughout the Detroit music scene. After watching how well her daughters sang together, she felt they were ready to jumpstart their careers on their own, without her direction. Dr. Mattie turned over the reigns to Twinkie and The Clark Sisters career really began to take off. They signed to Sound of Gospel Records that same year and released three albums, including He Gave Me Nothing to Lose, which hit the Billboard Top 20 Spiritual LPs chart.

Twinkie’s writing, arranging, conducting and producing skills were immaculate and granted them tons of popularity, especially with the release of the live recording Is My Living in Vain in 1980. This was their debut live recording and it was ranked number 21 on the 1981 Billboard Spiritual Albums chart, it then bumped up to number 1 the following year. They brought something incredibly different to the typical gospel tune that society was used to hearing. Their bluesy voices and funky beats brought much unprecedented success, with their next release You Brought the Sunshine in 1981. Inspired by Stevie Wonder’s “Master Blaster (Jammin)”, the song allowed them access into mainstream culture, while maintaining status within African American churches everywhere. Although it was still a gospel song, it peaked at number 16 on the Billboard Black Singles chart and number 27 on Dance Club Songs. They still were wildly successful in their original genre, as the Clark Sisters were ranked by Billboard as the number 4 Top Gospel Albums Artist in 1982 and number 1 in 1983. They released another album in 1982, Sincerely, which included the hit “Name It, Claim It”. You Brought the Sunshine however outshined that album, as they received a Grammy Award nomination and winning. They won the NAACP Image Award for Best Gospel Group in 1983, and then received a second Grammy nomination for “He’ll Turn Your Scars Into Scars”. Their success allowed them a platform for the Black gospel community that has honestly never been seen before. This platform gave them the opportunity to perform live at the 27th Grammy Awards in 1985, which they did with their mother as part of a medley with other gospel nominees for that year.

In 1986, Denise left the group due to conflicts with their mother and her sisters, but the remaining four sisters continued to release music after signing with Rejoice Records, a division of Word. Denise was not pictured in the album cover for Heart & Soul even though she contributed to the making of the album before her departure. This album had a more contemporary feel and sound than their previously released ones. In 1986, they released a bolder and more intense sound with their critically acclaimed album, Conqueror. Their highly anticipated live album, Bringing it Back Home was released in 1989. This was their last group album before Twinkie branched off to launch her solo career. 1994 was their last studio album of the decade, Miracle, and only included Jacky, Dorinda and Karen. This was the first album recorded without the songwriting and vocals of Twinkie and was produced by BeBe Winans and Michael J. Powell, and did not match the success of previous albums. This was due to the fact that they could not promote their project because of the illness of their mother, Dr. Mattie Moss Clark, who died in September of that year from complications from diabetes.

Twinkie went on to fulfill her calling as a minister and jumpstarted her solo career (prior to their 1994 album Miracle). However, she did manage to release her first solo album while still a part of the Clark Sisters: Praise Belongs To God, (1979), Ye Shall Receive Power, (1981), Comin’ Home (1982), Masterpiece (1996), and Live In Charlotte (2002).

Jacky, who was the oldest of the Clark Sisters, was also obtaining her nurse certification while making music with her sisters. She released her solo project, Expectancy, in 2005. She has since released singles, “My Season”, “Cover Me” and “Shout” in 2014. Her latest single, “Feel Good” was released in 2020, featuring Mary J. Blige.

Dorinda, the jazzy sister of the group, released her self-titled debut solo album in 2002, which earned her two Stellar Awards and a Soul Train Lady of Soul Award. She has then released four more albums, I Survived (2011) and Living It (2015), which was nominated for a Grammy Award for Best Gospel Album.

Karen, the most known of the group released her debut solo album, Finally Karen, in 1997, which was nominated for a Grammy and won a Soul Train Lady of Soul Award. Since then, she has released five more albums: 2nd Chance, The Heavens Are Telling, It’s Not Over, All in One, and Destined to Win.

In 2006, Karen, Dorinda, Jacky & Twinkie came back together to record a live album in Houston titled, Live…One Last Time. It was directed and produced by gospel legend, Donald Lawrence. This album was nominated for two Grammys and is personally one of my favorite albums that they have released.

In 2020, biopic,  “The Clark Sisters: First Ladies of Gospel” was released and gave viewers a glimpse into the life of The Clark Sisters and their mother, Dr. Mattie Moss Clark. Starring Aunjanue Ellis as Dr. Mattie Moss Clark, which was critically acclaimed, Angela Birchett as Jacky Clark Chisholm, Raven Goodwin as Denise Clark Bradford, Christina Bell as Twinkie Clark, Shelea Frazier as Dorinda Clark Cole and Kierra Sheard as her mother, Karen Clark Sheard. The film told their story from humble beginnings in the church choirs to their rise to fame, of course including the public struggles and personal issues they faced along the way. It was amazing to get insight on how some of their greatest hits were created, as well as the inspiration behind their lyrics. The film brought together the Black Christian community and was executively produced by Missy Elliott, Queen Latifah, and Mary J. Blige and directed by Christine Swanson.

During the 70s and 80s, Black gospel music transitioned from its traditional origins to a more secular sound, which appealed greatly to the masses. The Clark Sisters brought such an amazing presence to gospel music with their voices, melodies and lyrics. Although they were probably the most successful gospel artists during this time, they were not the only Black gospel artists releasing music at this time. Walter Hawkins entered the gospel scene in 1973 alongside his wife Tramaine Hawkins, who grew up also in the Church of God in Christ like the Clark Sisters. Her talents were noticed by Reverend James Cleveland, Andre Crouch and others, who desired to produce and tour singing groups with which she was apart of. She was the leading vocalist at her husband’s church and they recorded the live album, Love Alive, with the Love Center Choir. The album spent time on Billboard’s Top 40 gospel chart, especially with the hit single, “Goin’ Up Yonder”, which has now become one of Tramaine Hawkin’s signature songs. “Changed” is another signature hit that brought so many people to love Tramaine, for it’s harmonies and emotion throughout the entire song.

Another family of gospel artists that were on the scene were the Winans. In contrast to The Clark Sisters, The Winans consisted of brothers and sisters and were not nearly as successful as The Clark Sisters. They released many albums, but members eventually branched off to create their own solo albums. They also seemed to be amidst much controversy and trouble, which was something that The Clark Sisters never really endured on such a public level.

The main influence of the Clark Sisters should be no surprise, for it is the woman that taught them everything they know, their mother, Dr. Mattie Moss Clark. By the 1970s, she was very known in the Black gospel music culture, and definitely redefined gospel that was known prior. She discovered COGIC and joined to soon become the director of the choir at Bailey Temple COGIC. Due to her incredible compositional abilities, she was appointed the music director of the Southwest Jurisdiction of COGIC. Her highest title in the church was the international president of the entire music department, this role was huge and she mentored many including, Walter Hawkins, Rance Allen and Vanessa Bell Armstrong. She was a no-nonsense type of woman, but she molded gospel artists to reach their fullest potential for the reverence of God. In 1958, she became the first person to record a live gospel choir, she is credited with introducing three-part harmony to gospel arrangements and has written countless amount of songs. She trained choirs, soloists and musicians, especially because she was skilled in playing the organ as well. In 1979, she founded the Clark Conservatory of Music in Detroit, which offered vocal and instrumental lessons, as well as music theory. Because she was such an influence in their lives, they took on so many of her characteristics and held themselves according to her standards, even when she passed away.

“Victory” nominated for Traditional Gospel Recorded Song of the Year (2020)

The Clark Sisters: First Ladies of Gospel nominated for Inspirational Film of the Year (2020)

The Return won Traditional Gospel Album of the Year (2020)

“Higher Ground” nominated for Best R&B Performance by a Duo or Group with vocals.

Encore: The Best of the Clark Sisters won Special Event CD of the Year (2009)

You Brought the Sunshine (Sound of Gospel, 1981)

Heart and Soul (Rejoice, a division of Word Records, 1986)

Bringing it Back Home (Rejoice, a division of Word Records, 1989)

The Clark Sisters is the only singing group throughout history, that has not disbanded. What makes them so special is that they have always sung gospel and have stuck with that genre for the entire duration of their history. They have always been very true to their brand, which is why they are loved and adored by old and young people. Their music has been able to touch the hearts of many and they have continued to keep their sound tight and relevant for years. They are one of the most influential groups in the 20th century and has lasted across generations. Samples of their hits can be heard in the work of secular genres or covered by artists such as Aaliyah, Mary J. Blige, Zie’l, Faith Evans, Fantasia, Lil’ Mo, Al Green, Xscape, Jay-Z and Beyonce. I personally am a huge fan of the Clark Sisters and have personal connections with their songs. They hold a special place in my heart and I am definitely a huge fan. Their music will forever be known in gospel music, especially in the Black gospel music culture. 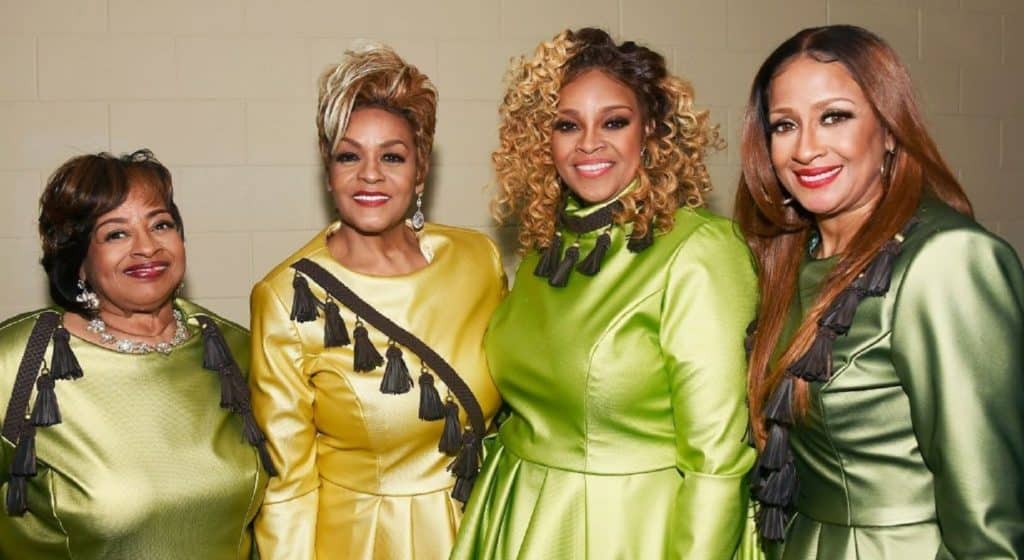 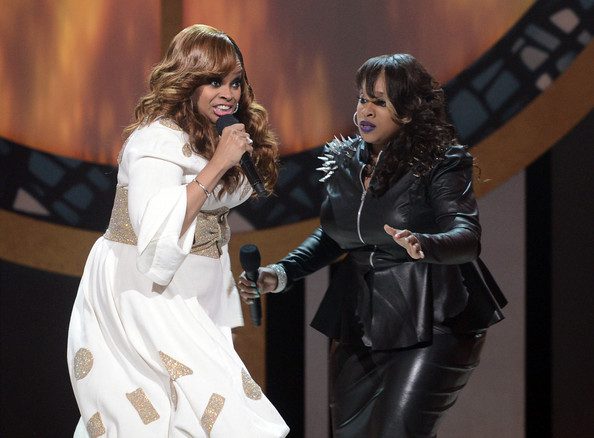