Born in 1893 in Carrboro, North Carolina, Elizabeth Cotten was born into a musical family. She was the youngest of five children. At age seven, she began to play the banjo. When she was eleven, she bought her first guitar for $3.75. In her early teens, she wrote her first song entitled, Freight Train. The song was inspired by a nearby train she use to hear from her childhood home. 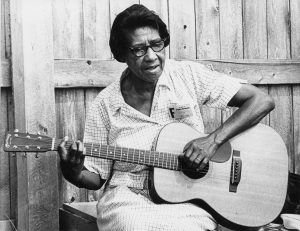 When Cotten was seventeen years old, she married her first husband, Frank Cotten. The couple shared a daughter, Lillie. Soon after Elizabeth gave up playing guitar for her family and the church.

A ONE OF A KIND TECHNIQUE

Elizabeth Cotten was left handed. She taught herself how to play the guitar. Because most guitars were strung for a right handed player, Elizabeth Cotten played her guitar upside down. The positioning of the guitar required her to play the bass lines with her fingers, and the melody with her thumb. At first, Cotten played with “all finger down strokes”, like the banjo.

Later, her style evolved into a unique form of finger picking. She developed a unique guitar style, characterized by simple figures played on the bass strings, in counter point to a melody played on the treble strings, this method became widely known as Cotton Style. Cotten created an almost inimitable sound. Her techniques would go on to influence numerous musicians.

Cotten had retired from playing the guitar for about twenty-five years. She did not begin recording and performing publicly until she was in her late sixties. Elizabeth Cotten was discovered while working in the home of Mike Seeger, a folk artist himself. The Seegers were a family full of those who were musically inclined. Mike Seeger began making bedroom reel-to-reel recording of Cottons songs in her home. These recordings became Cotton’s album, Folksongs and Instrumentals with Guitar. Shortly after her first album, she began playing in concerts with Mike Seeger. 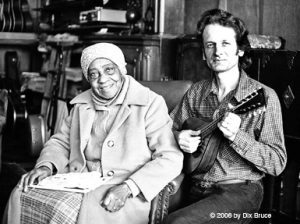 Her first performance was at Swarthmore College in 1960. In the early 60s, Cotten began to perform with some popular artist including Muddy Waters and Mississippi John Hurt. Cotten went on to write more music and gained recognition everywhere. In 1984, Elizabeth Cotten won the Grammy Award for Best Ethnic or Traditional Recording for her album, Elizabeth Cotten Live.