There’s More to the Blues than Feelin’ Blue

The blues can be traced as far back as the 1890s in the Deep South.  After slavery was abolished, Black Americans needed a new way to express themselves and talk to each other.  Out of the structure of work songs, churches, and African musical elements (the field hollarer, call and response, improvised forms of religious worship, etc.) combined with lyrics expressing Black American’s troubles during that time period emerged the blues.

Blues lyrics are told in the first person and primarily on the feelings and emotions of the singer.  Even though the blues are known for expressing times of “feeling blue,” blues lyrics can contain humor in the form of irony, words with double meanings, etc.  Instruments for the blues were guitars, pianos, drums, and harmonicas (among others), but it was also common for musicians to use whatever they would get their hands on as instruments, including washboards.  Call and response in work songs and churches involves the lead singing a line and the choir, other singers, or audience repeating it or responding. In the blues, however, the lead would sing a line and it would be followed by an instrumental of the sang tune and beat.  Almost all blues songs incorporate the twelve-bar structure (pictured below). Each bar has four counts and the chords change from bar to bar. 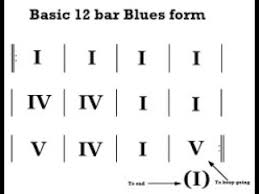 When the blues first became popular, Black men were not allowed to perform as themselves.  Instead, they were forced to perform as demeaning characters (e.g. clowns) and dress up in funny clothing and do humiliating dances.  Black women, however, could perform naturally and because of that, many of the first successful blues artists were women. As the blues became more mainstream, White people stole it from the Black community and Black musicians were denied the recognition they deserved for the creation of this genre.  When White, middle-class, liberals began listening to the blues, the music was looked at in the context of the Civil Rights Movement and the blues lyrics and music became political.

In addition to the radio and sheet music, most of the money that was made off of the blues was from records.  Race records, in particular, were music created and performed by Black musicians for Black audiences.

The blues is yet another genre of Black American music that shows the obsession White America has with our culture and their lack of respect for us because, at the very least, they should give credit where credit is due.  This genre also demonstrates the creativity and resourcefulness of the Black community because when drums, guitars, and other common instruments we unavailable, they used other everyday items to make music.