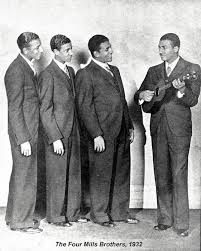 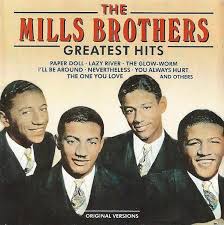 An astonishing vocal group that grew into one of the longest-lasting oldies acts in American popular music, the Mills Brothers’ quickly moved from novelty wonders to pop successes and continued amazing audiences for decades. John Charles (b. 1910), Herbert (b. 1912), Harry (b. 1913), and Donald (b. 1915) Mills were born in Piqua, Ohio. They began their career as a quartet in a barbershop owned by their father, John H.  Mills.  Their father owned a barber shop and founded a barbershop quartet as well, called the Four Kings of Harmony. His sons obviously learned their close harmonies first-hand, and began performing around the area. Their first public performances were in variety shows on the radio. They moved to New York City and became the first African-Americans to have their own national radio show. They performed under the name “Four Boys and a Guitar”. They only used their father’s guitar and their voices as instruments. They each took on an instrument. They imitated two trumpets, a tuba, and a trombone. They sounded like a full jazz band on songs like “Tiger Rag” and “St. Louis Blues”.

The group’s exposure continued during 1932, with appearances in the film The Big Broadcast and more hits including “St. Louis Blues” and “Bugle Call Rag.” John, Jr.’s sudden death in 1936 was a huge blow to the group, but father John, Sr. took over as bass singer and Bernard Addison became the group’s guitarist. Still, the novelty appeared to wear off by the late ’30s; despite duets with Ella Fitzgerald(“Dedicated to You”) and Louis Armstrong (“Darling Nelly Gray”), the Mills Brothers’ records weren’t performing as well as they had earlier in the decade. All that changed in 1943 with the release of “Paper Doll,” a sweet, intimate ballad that became one of the biggest hits of the decade — 12 weeks on the top of the charts, and six million records sold (plus sheet music). The group made appearances in several movies during the early ’40s, and hit number one again in 1944 with “You’ll Always Hurt the One You Love.”

In 1936, the family suffered a blow when the eldest brother John Charles passed away. They almost decided to end the group altogether, but their father stepped in and took over his son’s role. They went on to make records with Ella Fitzgerald, Louis Armstrong, and Duke Ellington focusing mostly on the hot-jazz style, scat singing, and instrument imitations. Their biggest record was in 1943 with a record called “Paper Doll” it sold over six million records and was a sheet music best-seller as well. In the mid-1940s, they became a more “normal” group with the backing of an orchestra or regular rhythm section. Their father retired from the group in 1956. The brothers continued the act as a trio. They recorded and performed regularly into the 1970s. They ended the act when Harry died in 1982. Donald Mills performed their hits with his son, John H. Mills II, until his death in 1999. Their songs were later used in movies, including Raging Bull and Pearl Harbor.  The last surviving sibling, Donald, began performing with the third generation of the family — his son, John II — until his own death in 1999.