Being labeled a pioneer is not an easy or light-hearted action. It takes a lot to become a pioneer. A pioneer is the first to apply or develop a new method, area of knowledge, or activity. A pioneer paves the way for future generations. Pioneers changes the way something is done, so much in a way that so it will never be the same again. They are innovative, inventive, and original. It is one thing to be labeled a pioneer, but to be labeled a black woman pioneer is so much more. In this case, Rosetta Tharpe also known as Sister Rosetta Tharpe and the Godmother of Rock and Roll was a pioneer to say the least.

Tharpe was born Rosetta Nubin on March 20, 1915 in Cotton Plant, Arkansas(Ankey). Her journey to becoming a rock n roll pioneer began when she started singing as a child with her mother in church. Tharpe was known as a child prodigy because she was singing and playing the guitar by age four. Because she showed so much talent at a young age, Tharpe and her mother moved to Chicago to join the Evangelical Church of God(Ankey). The Evangelical Church of God was a church famed for its musicians. Surrounded by so many musicians, it was there that Tharpe was really able to experiment and continue to develop her talent. Tharpe began to tour the country with her mother singing and playing the guitar at gospel concerts. In 1938, Tharpe left the church and moved to New York City where she became a popular nightclub performer and eventually signed with Decca Records to began her career in showbiz(Ankey). 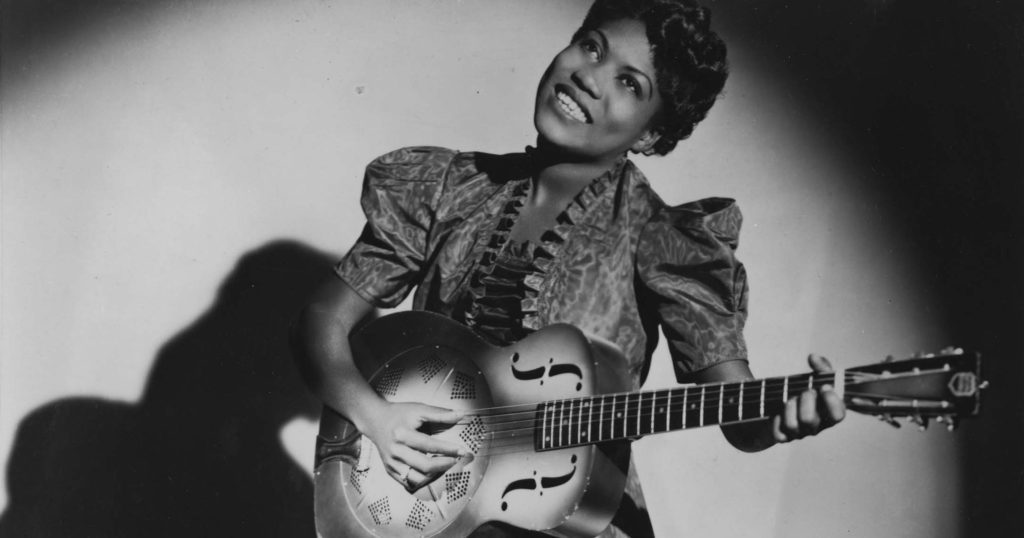 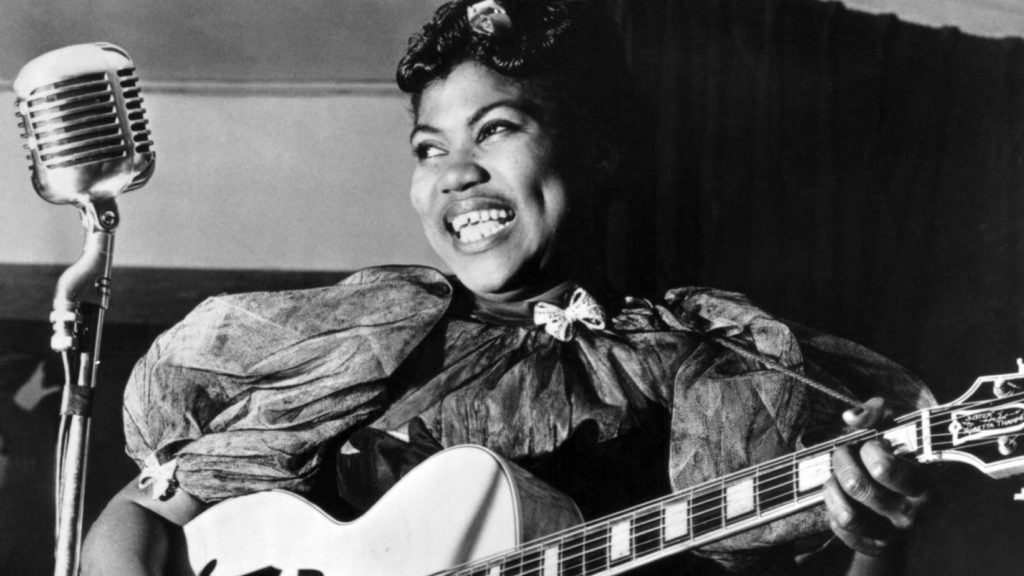 Her electric experimentation led to distortion techniques that created Blues Rock. Harriot writes, “Many churchgoers were shocked by the mixture of gospel-based lyrics and secular-sounding music, but secular audiences loved them.” Her sound was a ridiculously unique blend of gospel, sensuality, and an infectiously melodic guitar. Her uniqueness catapulted her to stardom. Becoming a pioneer is all about breaking down barriers and going against the norm. Her sound was loved by many but not everyone. Tharpe was snubbed by religious circles who thought her music was evil and playing a guitar was a sin. It was bold and courageous of Tharpe to still continue to play so loud and proud. Despite the negativity of the religious circles, Tharpe persevered like the pioneer she is.

Tharpe didn’t let the opinions of others control or defer her. She sang, played, and danced how she wanted. Tharpe would have different bands of her choice join her on tour. Diaz-Hurtado points out that Tharpe brought the Jordanaires on tour with her in 1938. The Jordanaires were a male, all white singing group. It was taboo for white and black musicians to perform together but Tharpe didn’t let that stop her. She was all about the music and she chose them because their sound meshed well with her own. Initially, they were questioned by audiences but the music eventually won them over. Again, Tharpe decided to do exactly what she wanted and it worked out successfully. Tharpe’s show’s were sensational because of the simple fact that she put the music first and simply played her heart out every night.

Tharpe was all about defying conventions and going against what was expected which was a major part of her establishing her pioneer status. She had a rebellious kind of attitude which made her performances so iconic at the time. Csaky notes that in 1946, Tharpe met Marie Knight, gospel singer and pianist, and suggested they tour together. Because Knight and Tharpe were so talented with their instrument playing skills, they didn’t need any other band members so it was just the two of them headlining. This tour itself was revolutionary and controversial because it was unheard of to have two women touring together alone with no men. This helped to boost her pioneer status. She was doing what was unheard of and looked down upon but the tour was extremely successful. The duo was unmatched. There was so much talent on the stage. But then again, there was nothing ordinary or plain about Tharpe.

Tharpe was loved everywhere because of her voice and undeniable talent. Ankeny mentions that during World War II, Tharpe performed for the soldiers and they absolutely adored her. Her voice was just so mesmerizing. Tharpe was able to temporarily take them away from their situation and give them something else to think about with just her voice alone. There was so much going on in America at this time and Tharpe’s shows served as an escape. Not many people have this ability and Tharpe completely mastered it which only added to her trailblazer status.

Although Tharpe was a national superstar gospel singer, she was still a black woman. Tharpe had to deal with the struggles of being black in America at this time. Diaz-Hurtado explains, “Despite her fame, institutional racism in the mid-1940s was still rampant. On tour, all restaurants and hotels were still segregated, so Tharpe slept on buses. She went around the back end of restaurants to pick up food because they wouldn’t let her in.” Tharpe was performing for white people she could not dine with. It takes a lot of drive and passion to continue in a career of showbiz and still be so disrespected and denied. Tharpe kept performing and putting on the best shows possible.

Tharpe lived during the first wave of feminism and she added her own twist to the idea. Tharpe rebelled against social expectations for women by touring the country, singing, dancing, and playing the guitar. It was very rare to see a woman, let alone a black woman playing a guitar publically. Her lyrics alone were rebellious to this very idea. Kretsinger-Walters claims, Tharpe defied gender constructs by playing so uniquely and boldly but she was downplayed by fans and media that she merely could “play like a man”, despite the fact that she could and did outplay many men of the time exemplifying her skills at guitar battles at the Apollo. She was revolutionary and disrupted the music genre with both her sex and race.

Not only was she breaking ground in the music industry for women and black women especially, she was also forging a new path for the LGBTQ+ community. Kretsinger-Walters adds that during the time, there was speculation that Tharpe was involved sexually with her tourmate, Marie Knight. Although at the time it was just speculation, this was revolutionary. Being a well-known queer black woman performer was completely unheard of. Tharpe broke down so many doors by just simply being herself and not caring what other people thought of her. Tharpe’s bisexuality was later confirmed which only again added to her list of defying conventions. Tharpe seemed to be fearless in a way. She knocked down every door that stood in her way. Tharpe is a great example of intersectionality and how owning who she was really contributed to the rawness and power of her music.

Tharpe was always blowing away her fans and keeping them on their feet. One of the most iconic moments of Tharpe’s career was her marriage to Russell Morrison. Tharpe held a public wedding and a concert with fireworks afterwards. Harriot illustrates that it took place at Griffith Stadium in Washington, D.C. and it was completely packed with 25,000 attendees. She charged everyone to come. This was a genius business plan. She had a concert and a wedding all in one and still made money. The next day, there was a recording that can still be viewed today. The wedding itself even boasted record sales. The numbers of this event speak for themself. 25,000 people not only showed up to view her marriage, but brought her gifts and blessings. Everytime Tharpe did a show, there was a line around the block and her fans really made their presence feel known.

Tharpe popularized gospel music among secular audiences and impacted American music history by creating a guitar technique that would later evolve into rock n roll. Tharpe is known as the Godmother of Rock and Roll because of the obvious influence she had on ‘fathers’ of Rock and Roll such as Chuck Berry, Elvis Presley, Johnny Cash, Jerry Lee Lewis, Little Richard and others. Harriot reports, “ Johnny Cash said that she was his favorite singer growing up. Little Richard called her his greatest influence. Chuck Berry said that his entire career was just “one long Rosetta Tharpe impersonation.” Tharpe along with other gospel singers laid the foundation for Rock and Roll. Her spiritual singing brought soul and feeling into the music which is why it was so appealing and personal. She gave a lot of people ideas. Tharpe’s sound is the essence of Rock and Roll itself.

Tharpe passed away in 1973 but her influence lives on today(Ankeny). Everyone who heard her sing or saw her perform, were touched. The article, ‘Sister Rosetta Tharpe’ comments, “Governor Edward G. Rendell proclaimed January 11, 2008 as “Sister Rosetta Tharpe Day” in the State of Pennsylvania”. Tharpe called Pennsylvania home for more than 15 years. This just goes to show that everyone who heard her song was touched. Tharpe performed in front of all kinds of people, poor, rich, middle-class and she made everyone love her. When she performing, the audience, the band, and herself included were all just one big happy family. This truly showcases the impact Tharpe had on the people who attended her shows because of how close they felt to her and how she made them feel.

In December 2017, Tharpe was inducted into the Rock and Roll Hall of Fame for her contributions(Kretsinger-Walters). With the induction into the Rock and Roll Hall of Fame, she is slowly getting the recognition she deserves. Tharpe is also known as the ‘forgotten mother’ because she wasn’t recognized for her contributions. Maybe her contributions weren’t initially recognized because she was queer or a woman or black. But today, her influence cannot be denied with modern technology. She was a phenomenal show woman. Tharpe is a true icon who had a unique and upbeat interpretation of gospel music which ultimately led to the creation of Rock and Roll.

At a young age, Tharpe was one of the most popular musicians. Not only was Tharpe brave and successful, she was self-made. At one point, she was rich, successful, and loved dearly by her fans. Tharpe was not born into wealth or priviledge. She was the daughter of two cotton pickers. She acquired her fortune by working hard, doing what she loved, and not letting anyone discourage her. Not only did she have to deal with the struggle of being black but also being a woman. As a young, black female performer in New York, she had to establish herself in a male-dominated industry. Her signature style could be identified in a lot of early Rock and Roll music. What we know as Rock and Roll did not exist before her therefore making her the most influential artist ever.  Her blend was extraordinary and earth shattering. There was absolutely no one like her. Sister Rosetta Tharpe was an iconic queer black woman who invented the classic American genre, Rock and Roll.