The Establishment of The Mills Brothers Quartet

The Mills Brothers earned their title as the best quartet in history. They have inspired many successful jazz and pop artists after their time. As four young brothers, they did not know that they would soon be celebrities who started singing at their father’s barbershop in Ohio.

Where It All Started 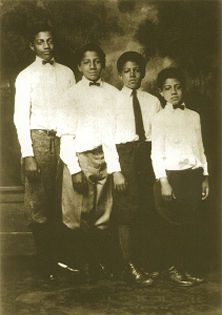 The Mills Brothers is a well-known quartet of four brothers by the name of John Jr., Herbert, Harry, and Donald who were all born and raised in Piqua, Ohio. You might also know them as Four Boys and a Guitar, which is what they were originally called. The Mills initiated their musical journey by learning from their father, John H Sr., who was in a barbershop quartet called Four Kings of Harmony. Their mother Ethel was also involved with music as she sang opera for a short period in time. As they continued to develop, the Mills brothers started singing in the choirs of Cyrene African Methodist Episcopal Church and Park Avenue Baptist Church. It was not until the brothers were about to perform a Piqua’s Mays Opera House contest and Harry lost his kazoo, that they realized the significance of their beautiful voices. Harry imitated a trumpet by cupping his hands over his mouth while they sang a cappella. Shortly after, their four part harmony changed for the better with Donald imitating the trombone, Harry and Herbert stuck with the trumpet, and John Jr focused on the tuba.

In 1928, the Mills Brothers careers took a turn for the best. They auditioned for the WLW radio station in Cincinnati, Ohio as and accompaniment to the Harold Greenamyer Band. The quartet sang for Duke Ellington who was so impressed. As a result, they were signed to Oken Records by Tommy Rockwell which is why they moved to New York. The Mills Brothers quickly took off nationwide after a remake fo their song “Tiger Rag”. This record was so big, that it was the only record to sell more than a million copies at the time. The Mills became so iconic that they were sponsored by the largest advertisers at the time like Crisco and Crosley Radio. They were also featured on a 1932 all star radio known as “The Big Broadcast”. In 1934, they made history as the first African Americans to perform for British royalty at the Regal Theatre for King George V and Queen Mary.

Together Until The End 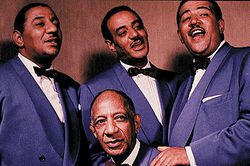 After the passing of eldest Mills brother John Jr. in 1936, their father John Sr. joined the group as baritone and tuba. The quartet traveled to Europe where they performed and thrived until 1939. Soon their father decided to depart from the group at the age of seventy five. They toured for forty weeks each year performing at clubs and theaters. The Mills Brothers had an extreme influence on the jazz and pop groups later to follow them.

Listen to The Mills
Brothers Below!