Born in Bed-Stuy New York, Richie Havens was the eldest of nine other children. At the age of 16 he was organizing his friends on the street corner performing with the McCrea Gospel Singers. When Havens was 20 years old, he left Brooklyn in search of an outlet for his artistry in the Greenwich Village . He first visited the area during the Beatnik days of the 1950’s and he performed poetry. He then started drawing portraits and staying up all night listening to folk music at the club. Soon his career began and spread beyond the circles of the folk village. 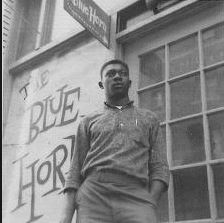 Havens released multiple albums, but in 1968, he came out with Something Else Again , which was his first album to hit the Billboard Charts. Richie’s performance at Woodstock in 1969 was a turning point in his career, as he was now able to hold a crowd for three hours. Following the success of his Woodstock performance, Havens created his own record label, Stormy Forest. In his music, he encompassed the sounds of folk, soul, and R&B, and he was best known for his covers of folk and pop songs.