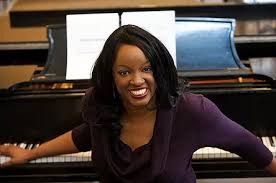 Born and raised in New York, Nkeiru Okoye was the second daughter of a Nigerian father and an African-American mother. She studied piano at the Manhattan School of Music Preparatory Division, and went on to earn a B.A. in music theory and composition at the Oberlin Conservatory of Music, and an M.A. and Ph.D. in theory and composition at Rutgers University.  Among her teaching credentials, she was an assistant professor of music at Morgan State University in Baltimore from 2001-05 and currently John Hopkins University. The music of Nkeiru Okoye has been performed on four continents.  An exciting voice in symphonic contemporary classical and educational/family repertoire, her music is notable for its accessible style, appeal to diverse audiences, and combining of contemporary classical, African-American, popular music, and West African influences.  Her best-known pieces include Voices Shouting Out, a short orchestral work; The Journey of Phillis Wheatley, a narrated demonstration piece; African Sketches, a piano suite; and Songs of Harriet Tubman, a song cycle from her upcoming folk opera about Tubman. She was awarded a $15,000 grant to finish her work on the Harriet Tubman play. She has won awards or commendations from the International Society for Contemporary Music (ISCM).