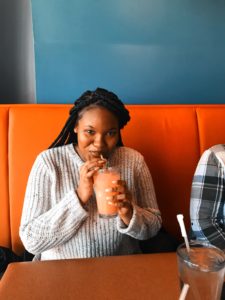 My name is Niya Ray. I am a sophomore political science major from Philadelphia, Pennsylvania.

While in school I am studying political science on a pre law track as I plan to be a future attorney. I want to be an attorney in the prosecutors office eventually work my way up through to congress. I have a special passion for the wrongfully convicted that started when I was in high school but was heightened when I worked in my spring semester with the Georgia Innocence Project. I plan to try and stop wrongful convictions in all aspects. While at Spelman I am also involved in the Social Justice Program.

I have many hobbies that mostly include some form of entertainment. I am a whole entire movie buff, from Hitchcock to Spike Lee there are a wide range of movies I enjoy mostly falling into the horror category. I also have a serious love for TV shows, like The Wire, that are specific to a certain place or time in history. However my love for music is unmatched. Having parents who were born in the 70’s and lived through the 80’s and 90’s that music has heavily influenced me, from El Debarge to Brandy to A Tribe Called Quest. However being from Philly and growing up primarily Neo-Soul has been the soundtrack to my entire life. I also love the gym, dancing, singing, and going out to eat I love food.