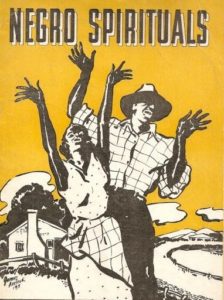 Negro spirituals were songs created by slaves to express what they were going through and their Christian values. They were often reffered to as hymn by European observers, which they distinctly were not.  They started with slavery. Africans were kidnapped from their homes and forced into slavery in a New World. They worked on plantations and in houses. Slaves were allowed to meet for Christian services only. They used this time to sing negro spirituals to talk about their struggles and hardships. Slaves were only allowed to meet Negro spirituals evolved as time went on.

They were typically performed in a call and response form structure. There was typically hand clapping and body movements. They were not written down until later years by observers. Slaves also practiced the art of ring shouts, which was a form of religious musical expression. When he “slave songs” began to be performed by jubilee singers, it was then referred to as concert spirituals.