The Minstrel Show was an American form of entertainment developed in the early 19th century. 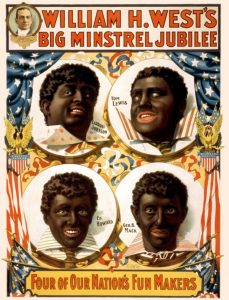 The full-length theatrical entertainment featured performers in blackface who performed based on parodies and stereotypes of African American life and customs. Minstrel shows emerged from pre-industrial European traditions of masking and carnival. In the United States, they began in the 1840s. The show included working-class white men dressing up as plantation slaves. They would imitate black musical and dance forms. White performers would blacken their faces, dress in outlandish costumes, and then perform songs and skits that mocked African Americans. The founders of this form of entertainment were northern White men whose experience in circus acts had predisposed them to employ wild gestures, tattered costumes, bold makeup, and percussive sounds. The musical content of the shows varied during the 1840s and the 1850s. The musical content included rhythmically insistent patterns in the songs, vigorous body movements to accompany them and dialogue that engaged the audience. The minstrel show consisted of an opening that comprised of an overture, songs, and song parodies, a middle section filled with instrumental solos, ensembles, and dances, and an elaborate concluding skit, which was usually set on a plantation. There was also a blackface finale which was the grand conclusion, known as the “walk around”.