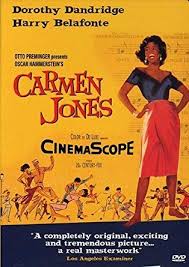 Carmen Jones — starring Dorothy Dandridge and Harry Belafonte — is a Broadway musical depicting a black flirtatious, parachute maker during World War II.  Carmen Jones begins her story by seducing Joe, a man in the Air Force who is planning on marrying another woman. Joe is sent to military prison after Jones ran away from him and he failed to deliver her to the proper authorities.  During his incarceration, Jones met a famous boxer who was interested in her, but she wanted to wait for Joe’s release. Jones decides to run off with the boxer and when Joe unsuccessfully tried to persuade her to leave with him, he kills her.

The music for this play was translated from the French opera Carmen to English and modified by Oscar Hammerstein II.  Thus, all of the songs are primarily opera. Drums were one instrument that were added to this play that contributed to the intensity of some of the songs.  It was very upbeat and entertaining, which is unlike any opera music I have ever heard. Overall, I like this musical. The plot grabbed my attention immediately and I really appreciate the all-black cast.