Minstrel shows, or theatrical entertainment featuring performers in black face emerged in the 1840’s. Thomas Dartmouth and a few others are noted fr developing the black makeup face used by minstrel performers. The idea of minstrel shows were to mirror the stereotypes of southern African American life. These parodies came in the form of songs, dances and comedy skits. Minstrel shows usually comprised of an opening song, miscellaneous variety acts, an elaborate skit, and a final dance which was included the black face as a finale. 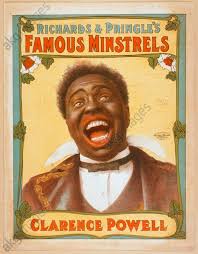