Missouri's Gift to Music: The Heartland of Ragtime 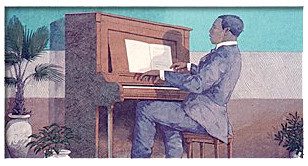 Missouri. A state known for its barbecue or Gateway Arch is also famous for being the home of many renowned ragtime composers and musicians. From Scott Joplin to Louis “Bird Face” Chauvin to Thomas Million Turpin and John Stillwell Stark, Missouri became a hotspot for ragtime musicians. Without Chestnut Valley in St. Louis, MO, ragtime music would not have flourished as it did.

Ragtime is a music genre that was created in the late 1800s and lasted until the 1920s, to which it eventually morphed into jazz. The ragtime genre of music is defined by its syncopated or “jagged” rhythm that added a bit of “swag” to the other slower popular tunes of the time.

What was happening in Missouri during the early 1900s?

St. Louis, Missouri, was one of the places to be in the late 1800s and early 1900s. Its location being centered in the middle of the United States proved to be a premium location as it served as a midpoint for when travelers from the North went to the South or vice versa and was a crucial rest stop for those heading West. It also was a good location for African Americans to make a living. During the 1880s, St. Louis was home to many prospering Black business people who thrived in the sporting district of St. Louis, better known as Chestnut Valley.

How did this help the ragtime boom in the state?

It was thanks to one of these Black businessmen that St. Louis, MO, became the hotspot of ragtime. John L. Turpin, a Black businessman who moved to St. Louis in 1887, opened a saloon in the city called the Silver Dollar. Following in his father’s footsteps, Turpin’s son, Tom Turpin in 1897, also opened his own saloon, and in addition to being an entrepreneur himself, he was also a self-taught pianist. The same year he opened his saloon, he released his composition, “Harlem Rag,” a piece that became a defining composition of the genre. By the year of 1900, Tom Turpin opened up yet another saloon and brothel, called the Rosebud. By this time, Tom Turpin also had two young proteges, Joe Jordan and Louis Chauvin. Between the three ragtime musicians they not only put the Rosebud on the map, but they also helped make St. Louis the first city of ragtime. 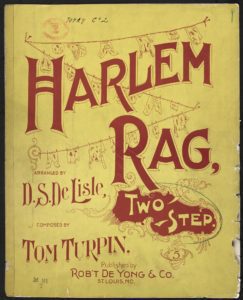 Why is this important?

Noted by music historians David Jasen and Gene Jones, Missouri was the place to be if you wanted to listen to ragtime music as, “There were more rags-and more good rags-from Missouri than anywhere else” (That American Rag, 1). Not only did Missouri produce the most ragtime tunes, but their quality was substantially better than anywhere else in the states, indeed being instrumental in increasing the popularity of the genre of music. Yet, Missouri, or more specifically, St. Louis, may have never become the capital of ragtime if it were not for Chestnut Valley and the environment that allowed for Black business to thrive. As stated earlier, several artists from Missouri defined the ragtime music genre. Still, most of them rose to national prominence due to the Turpin family, who, thanks to Chestnut Valley being a prime location for Black businesses, opened several saloons that helped make St. Louis a ragtime hub.

Jasen, David, and Gene Jones. That American Rag: The Story of Ragtime from Coast to Coast. New York: Schirmer, 2000.