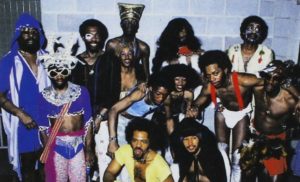 Funk is defined as “a music genre that originated in African-American communities in the mid-1960s when African-American musicians created a rhythmic, danceable new form of music through a mixture of soul music, jazz, and rhythm and blues (R&B)”. Funk became even more popular in the 1970s. During this time there was so much going on in America, it was said to be a “tumultuous time”.  They also say that it resembled events from the 1960s. From the Women’s Movement to LGBTQ+ Rights, and African American movements everyone was in search for equal rights. The decade was said to be “a repudiation of the 1960s. A “New Right” mobilized in defense of political conservatism and traditional family roles, and the behavior of President Richard Nixon undermined many people’s faith in the good intentions of the federal government. By the end of the decade, these divisions and disappointments had set a tone for public life that many would argue is still with us today.” After drama with President Nixon and the Watergate scandal music and fashion continued to develop. Fashion trends included bell-bottom pants, ponchos and plaid, and patchwork patterns. As far as music goes James Brown had an enormous influence on Funk. His band established the “Funk Beat” and “Modern Street Funk”. Funk Beat was a heavily syncopated, aggressive rhythm that put a strong pulse on the first note of the musical measure. Many bands and artists known as soul singers adapted this style like the “Ohio Players”, “Kool and the Gang”, “Stevie Wonder” and “Parliament-Funkadelic”.  The style of beat and aggressiveness related to funk can be seen in the early stages of hip hop as well.