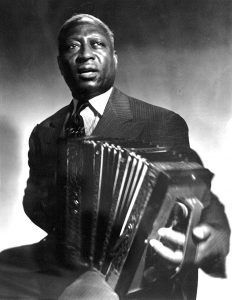 Lead Belly was born on the Jeter Plantation in Mooringsport, Louisiana, on January 20, 1888. He attended school in Texas until around age 13, playing in a school band, and then worked the land with his father.At a young age he began to learn how to play different instruments but guitar is what he ended up focusing on, specifically the 12 string guitar. At 16 he settled in Shreveport, Louisiana, for two years, where he played music to support himself.

In December 1917, Ledbetter was sent to jail in the charges of murder. In 1924, Lead Belly sang for Texas governor Pat Neff a song in which he asked for a pardon. Luckily Neff pardoned Lead Belly and he was released. Five years later he was involved in a stabbing incident that sent him to jail once again. Since the Great Depression could not support all the prisoners in jail, he applied for early release and was once again released from prison.

He moved to New York to really begin his career. In 1939 was was arrested for a third time for stabbing a man and was in jail for 8 months. When he was released, he appeared on a few radio series and later moved to Los Los Angeles. He began really recording when he signed with Capitol Records. Unfortunately he was diagnosed with ALS and died at 61.