What is Jazz Fusion?

Jazz Fusion, or “Jazz Rock,” is a subgenre of Jazz developed in the late 1960s that blends traditional sounds of jazz with rock, funk, and R&B.

Jazz fusion incorporates traditional jazz instruments such as the trumpet, saxophone, however, Jazz Fusion is less likely to use a piano found in traditional jazz. Instead, Jazz fusion was influenced by the popular instruments and sounds of the time so one will hear more electric guitars, bass guitars and synthesizers. Jazz Fusion also incorporates improvisation, a skill used in many jazz subgenres. Similarly, Jazz fusion relies heavily on solos like many forms of jazz, but Jazz Fusion solos more resemble rock. Lastly, in contrast to traditional forms of jazz, Jazz Fusion is considered “groovy” because of the repeating rhythmic pattern created by the band, stemming from genres like funk and rock.

Miles Davis (left) and Herbie Hancock (right) had a lot to do with the popularization of Jazz Fusion. Miles Davis’s 1969 album, Bitches Brew, is cited as Davis’ second, but most popular Jazz Fusion pieces. This album blended Free Jazz with electronic keyboards, guitars, and various percussion instruments. Also, Davis played his guitar in a way that resembled the sound of an electric guitar. Although Miles Davis opened the door for fusion, his sideman, Herbie Hancock, greatly contributed to Fusion in his own right. Throughout the 70s, Hancock’s style of fusion became very popular. He seamlessly blended elements of jazz, funk, disco, and electronic music and made commercially successful music in a dying genre. His 1973 album “Head Hunters” is the highest acclaimed jazz fusion album. 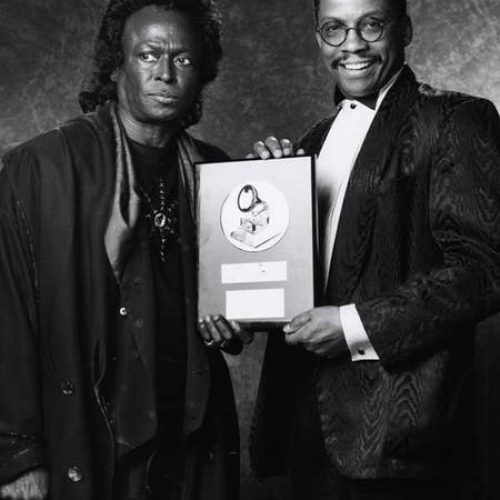 Although Jazz Fusion was inspired by other genres, it also influenced several genres including:

Jazz Fusion and the Black Intellectual

Jazz Fusion can be related to Black intellectualism and Black excellence. In the 1960s, Jazz was considered a dying genre by music critics. It was being overshadowed by newer genres such as Rock. However, Black musicians such as Miles Davis and Herbie Hancock found a way to capitalize off of new and commercially successful genres like funk and rock by pioneering fusion. This evidently worked because Miles Davis’ Bitches Brew sold over 400,000 copies, making it his most successful album. Also, the popularization of fusion not only revived a genre that was losing steam, but it also in a way reclaimed rock, a black genre that has been appropriated by white artists Lastly, fusion is an extremely difficult genre to master due to the artists needing to be able to cohesively blend multiple genres that typically would not blend. Black artists’ pioneering and mastering of a such a difficult genre demonstrates brilliant talent and Black excellence.