From the 1950s to the 1970s, there was a significant musical evolution. This artistic offering titled “Have You Heard?”, highlights some of the essential musicians, songs, and historical moments during this period. Have you heard of Charlie Parker?

His sound is sharper.

He follows his flow.

Have you heard his tune KOKO?

Yea, the one with Dizzy Gillespie

Have you heard of Miles Davis?

His creation of modal jazz made him famous.

During the war, he relaxed the mood.

Slowed the tempos with The Birth of Cool.

Jazz was never the same.

Have you heard of John Coltrane?

While John played the saxophone

Their sounds were new.

Have you heard their tune Kind of Blue?

What if Jazz had no rules?

A movement led by Dr. King

Blacks fought for liberation, but only jazz became free.

This movement sparked a musical revolution

Have you heard of jazz fusion?

It made the whole city dance at the Harlem Cultural Festival.

A concert where Black artists finally got to shine. 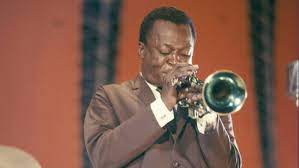 PrevPreviousFUNK – The Sound of Change
NextSkip James The Most Influential BluesmanNext