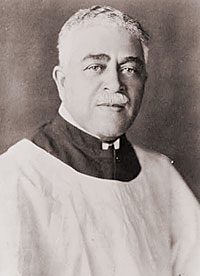 Henry “Harry” Thacker Burleigh was a black classical composer, arranger, and baritone soloist from Erie, Pennsylvania. He received his earliest music education from his mother, and was influenced by his grandfather, a former slave who sang spirituals to Burleigh as a child.

Burleigh attended the National Conservatory of Music in 1892 when he was 26 years old. It was here that he began working with an instructor who influenced him to start incorporating the melodies from spirituals into his compositions. By doing so, he preserved the spiritual music he had grown up hearing from his mother and grandfather and popularizing it for a different generation and audience.

In 1894, Burleigh went on to become a baritone soloist at St. George’s Episcopal Church of New York, a position which he kept for over 50 years. It was his career at St. George’s that really sparked Burleigh’s very successful career as a singer.

Harry T. Burleigh composed between 200 and 300 songs in his song style which combined classical and spiritual, gaining him a lot of popularity and acclaim during his time.