The Jubilee Quartet genre, which derives from negro spirituals and folk music, made its debut in 1871 when Fisk University toured the Midwest spreading their gift of song and culture. While Fisk University may not have known it at the time, they were trailblazers that gave birth to a genre of music that would reign well into the 20th century. The term Jubilee originates from biblical times, in the book of Leviticus and was used by Jeremiah to describe the release of slaves during the Sabbatical year. According to Leviticus, slaves and prisoners would be freed, debts would be forgiven, and the mercies of God would be particularly manifest. It was said that it shall be a jubilee to you; and each of you shall return to his own property, and each of you shall return to his family.

“This fiftieth year is sacred—it is a time of freedom and of celebration when everyone will receive back their original property, and slaves will return home to their families”.
— Leviticus 25:10

The Fisk University chorus named their quartet this because majority of the students were children of freed slaves so the name seemed fitting. The Fisk Jubilee Quartets went on world tours and even performed for Queen Elizabeth. Diverting from the appropriated quartets by white men in black face, the Fisk Jubilee Quartets sang spiritual songs internationally to raise money for their institution. The choir paved the way for Jubilee Quartets that evolved into upbeat, acapella songs comprised of a high and low tenor, a bass tone, and a lead baritone that swept the nation. 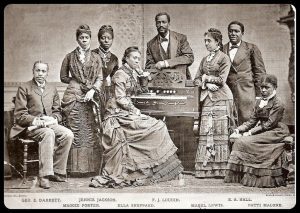 Although Jubilee Quartets were originally exploited in the 1840s by slave masters who abused their art for entertainment and perpetuating stereotypes, black people reclaimed the art and used it to demonstrate the power and spirit of a Negro. In the early 20th century record companies, radio broadcasts, and commercial recording companies discovered the market potential of Jubilee Quartets and began recording and broadcasting their music. By the late 1920’s every “race label” featured one or more jubilee quartets and during the 1930s the majority of sacred “race” records featured quartets. Quartets such as the Famous Bluejay singers of Birmingham, The Golden Gate Quartet, Fisk Jubilee Quartets or the Norfolk Jubilee Quartets are all examples of famous quartets.

Jubilee Quartets were brilliant groups comprised of four or more members, that took the world by storm. A genre born in slavery and transformed into black excellence and a song of the free. This genre of music that stems from folk and negro spirituals, paved a way for music such as Blues and Gospel. It also inspires many of the boy bands we know and love today such as New Edition, BoyzIImen and many more. Jubilee is yet another example of how black people remain spiritual through turmoil and continue to thrive. 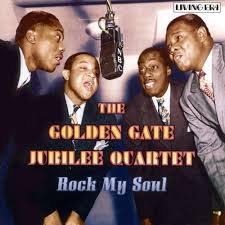