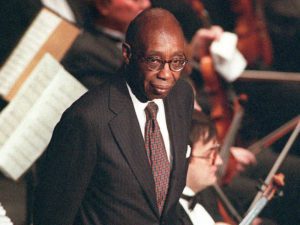 George Walker is simply a man of firsts. Born on June 27, 1922, In Washington DC, Walker started playing piano at age 5. Walker went on to graduate Oberlin College in Ohio and then went on to attend the prestigious Curtis Institute of Music in Philadelphia. Here he began his track record of frats by being the first black to graduate Curtis College of Music. He then went on to study in Paris of two years. George Walkers music was composed so that the average listener wouldn’t assume it was a black artists, and his music held up to that standard. It stood tall up against his white counterparts. His music however pulled from spirituals, blues. and jazz and though it had these elements his music was distinctly its own. Walker went on to be the first African American to win the Pulitzer Prize for Music with his work Lilacs. He was the first African American to be invited to play a recital at New York’s Town Hall and the first African American instrumentalist to play solo with the Philadelphia Orchestra.