In 1871, the Fisk Jubilee Singers began their first tour in a fundraising effort for Fisk University. The tour took the route of the Underground Railroad and performed spirituals, paying homage to their ancestors and heritage. Only five years after founding, the university was experiencing financial hardships, yet never strayed from their mission of educating Black coeds in Nashville, Tennessee. The school’s treasurer, George L. White, also served as the musical director and set out to honor both of his commitments by developing this historic group.

In the ensemble of nine, there were two quartets and a pianist. As they toured, the young singers surprised audiences by performing in serious yet elegant manner, as opposed to the “traditional Black minstrel fashion” that was expected from them. Outside of their performance on stage, the ensemble displayed their commitment to service by donating all of the raised funds to victims of the Chicago Fire in 1871. Although the students were happy to donate the money, the continued to their next stop in Cincinnati feeling tired and discouraged. Pulling from the 25th chapter of Leviticus in the Bible, Mr. White named them the “Fisk Jubilee Singers” to keep them encouraged on their journey. 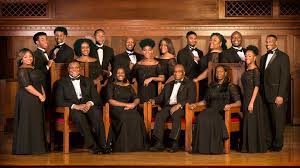