Everything is Better in 4’s – Jubilee/Quartets

In the 19th century, a new genre of music filled our homes. A highly rhythmic and fast tempo genre composed of groups of four,  is famously known as Jubilee Quartets. After the Emancipation Proclamation and the Civil War , slaves were finally able to enjoy basic human rights such as the right to gain an education. Thus, many universities were established by the Freedman’s Bureau to educate African-Americans and resulted in some of the first Historically Black Colleges and Universities such as Fisk University, Atlanta University, and the Hampton Institute. Many of these schools began singing groups which evolved into America’s first quartets. One of the most famous, being that of the Fisk Jubilee Singers. Jubilee Quartets originated on black college campuses, and quickly extended into black communities as various types of Quartets arose such as minstrel, shape- note, and even barbershop community quartets. Though each of these held different aspects of Jubilee sound, they allowed African-Americans for the first time to not only display their talent but to express joy in regards to their newfound freedom.

A typical Jubilee-Quartet group is made up of 4 to 6 people singing in four part harmony arrangements in a cappella. The genre style can be described as highly rhythmic and uptempo, yet minimal instruments are used. Traditionally, Quartet groups were male and they were always dressed to impress in a suit and tie. Blue notes, grace notes, and melisma were common aspects found in Quartets. Blue notes are notes that fall between two adjacent notes in the standard Western Division of octave, and grace notes are short ornamental notes performed as an embellishment before the principal pitch. Melisma is a single syllable sung over several pitches. From University Jubilee Quartets, Minstrel, Community Based, or Barbershop each differentiated in sound due to the various notes they used to add to their own style of Quartets.

For years, Slaves could only dream of being set free and in 1863 those dreams became a reality when the Emancipation Proclamation was carried into effect. However, freedom wasn’t what many Slaves had envisioned. Whites couldn’t fathom being equal to blacks and enforced laws such as Jim Crow Laws and Segregation to ensure that blacks stayed at the bottom of society as they were before. It was extremely hard for African-Americans to achieve an education or a job resulting in many to end up in poverty, sick, or even dead. However, the rise of Jubilee Quartets, allowed many groups the opportunity to obtain wealth and even a step into the Black middle class. Though, they were still facing racial oppression they were able to reap the benefits of their talent. 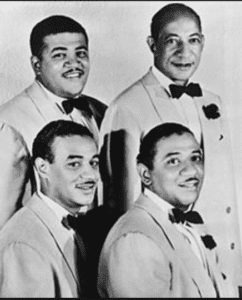 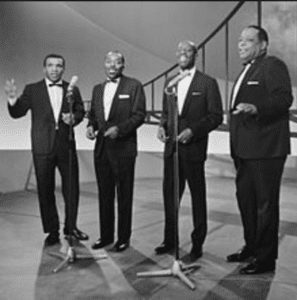 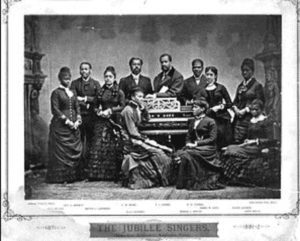 Jubilee Quartets were one of the few early genres that had the capability of being recorded. As Quartets  began to become more well known, Whites noticed the money that could be profited off of African-American groups. Record companies including Columbia and Victor Record Company began to record some of America’s first Quartets. However in the 1930’s Radios appeared and allowed Jubilee Quartets to be heard by millions nationwide.

Though Jubilee Quartets originated from Western music, African-Americans reclaimed the genre into how we famously know it today. Quartets have since evolved into Gospel, as many Jubilee/Quartet characteristics are evident into popular Gospel songs.

Jubilee-Quartets provided the world with not only a new genre of music, but a new sound that was unheard of in the 19th century. The genre allowed a platform for many African-Americans to show the world our culture, but also allowed a space to share our joy towards our newfound freedom.