On and On: A look into
ERYKAH BADU

“Peace and Blessing manifest with every lesson learned”

In creating this page, I had to consider who I wanted my artist to be. I thought of the Queen herself, Beyonce, but due to circumstances, i had to look for someone else. Upon choosing Ms. Badu, i was listening to my music and one of her songs from her mixtape came on and that’s how i decided. I googled Erykah Badu just to see what comes up and hundreds of pages and articles were to follow. I then went to the Woodruff library online database to see if any scholarly articles would come up in which they did.  I was focused on finding information about Erykah the person to see how Erykah the artist was molded. In addition to research articles, I used video interviews to truly get a sense of Ms. Badu.

Erykah Badu is a renowned singer, rapper, song writer, actress, and creative, dubbed the queen of Neo-soul. Badu hails from Dallas, Texas which is where her love for music fostered. She debuted on radio in high school as a rapper, but she mostly sings. Badu’s career took off in 1996 and since then she has been honored at many award shows and is even a Grammy Award winner. She heavily impacted the hip-hop and R & B era. Badu is well known for her neo-soul sound. Badu has released 5 studio albums, a live album, a mixtape, and numerous music videos and singles. 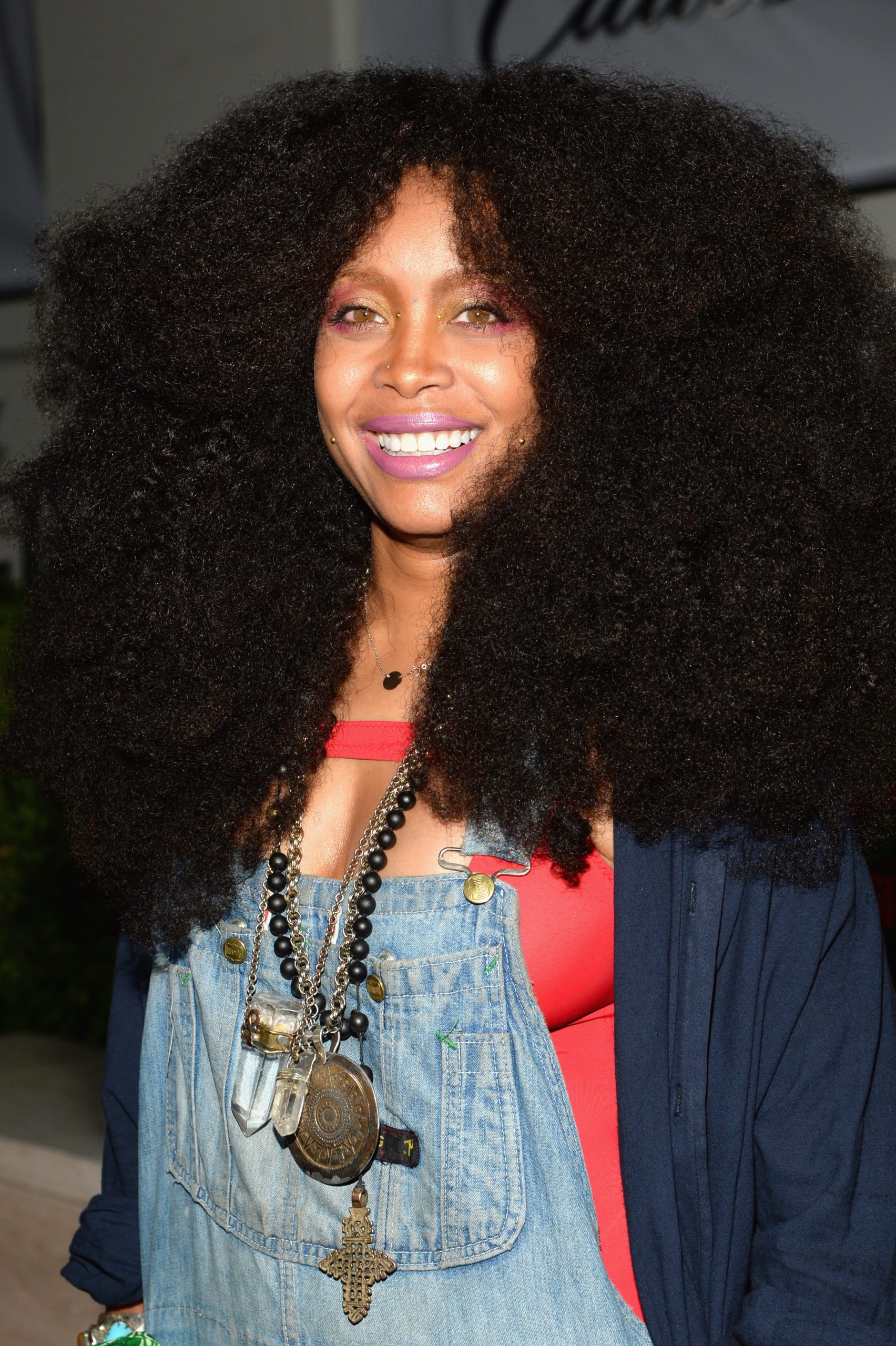 "If we were made in his image, then call us by our name"

Erykah Badu, born Erica Abi Wright, was born February 26, 1971 in Dallas, Texas. Erykah was raised by a single mother along with her brother and sister. Badu’s introduction to music at the young age of four. She began singing and dancing at the Dallas Theater Center and The Black Academy of Arts and Letters. At the age of 14, Badu really started to become who she wanted to be. She began free-styling at a local radio station. It was in this era where Erica became Erykah. She changed the spelling of her name because her old one reminded her too much of a slave name. Then she adopted the last name Badu, which was her favorite scat sound. After graduating high school, Badu went on to attend college at Grambling State University where she studied theatre. Erykah believed her dream at that time was bigger than college, so she left to start her full time music career. In order to make money, she taught drama and dance to children at the South Dallas Cultural Center. Working. While teaching Badu, also was in a music group with her cousin, Robert “Free” Bradford. Their group was called Country Cousins. Badu was discovered Kedar Massenburg while in the group and  he set her up to record a duet with R’N B singer D’Angelo called “Your Precious Love”. Massenburg eventually signed her to a record deal with Universal Records.

Baduizm was Badu’s debut album. It was released on February 11, 1997. Recording sessions for the album took place from January to October 1996 at in New York City, Philadelphia, and Dallas. The album was a hit and even made it to number two on the Billboard charts and number one on the US Billboard Top R&B/Hip-Hop Albums. Baduizm's success helped establish Badu as one of the emerging neo soul genre's leading artists. Many compared her to Billie Holiday.[ Baduizm was certified three times platinum by the Recording Industry Association of America and Gold by the British Phonographic Industry and the Canadian Recording Industry Association. From the album came four singles: "On & On" Next Lifetime", "Otherside of the Game", and "Apple Tree". “On and On” did so well that it gave Badu her first nomination in which she went on to win. She won Best Female R&B Vocal Performance and the album won Best R&B Album.

"I was born under water with three dollars and six dimes"

Badu recorded her first live album, Live, in 1997. It was released on November 18, 1997. While recording her album, she was pregnant with her son which she shared with Andre 3000, Seven. The release of ‘Live’ coincided with the birth of her son which made it even more special. The album reached number four on the US Billboard 200 and number one on the US Billboard Top R&B/Hip-Hop Albums. The album was certified two times platinum by RIAA for shipments of over two million copies. From the album came Badu’s lead single, "Tyrone",which became a R&B hit single. The album was nominated for Best R&B Album at the 1999 Grammy Awards, and "Tyrone" was nominated for Best Female R&B Vocal Performance.

Badu returned in 2000 to release her second studio album, Mama's Gun. The album was characterized as a more organic sound. It was primarily produced by the Soulquarians and noted bassist Pino Palladino. Mama's Gun incorporates elements of funk, soul, and jazz styles. Some found some of her lyrics hard understand. Mama's Gun was another platinum-selling success, and "Bag Lady" was nominated for a Grammy Award. In 2003 Badu was awarded her fourth Grammy Award for it.[29] In 2001 Badu embarked on the Mama's Gun World Tour.

"The world keeps turning. What a day, what a day"

On September 16, 2003, Badu released her third studio album, Worldwide Underground. Badu said that the album was designed to as "one continuous groove." The album recieved criticism for its unconventional structure and songwriting, but overall positive reviews. The album debuted at number three on the U.S. Billboard 200 chart and spent 11 weeks on the Billboard 200, it also entered at number two on Billboard's Top R&B/Hip-Hop Albums and spent 30 weeks on the chart.[38] Worldwide Underground was certified gold.

Badu’s fourth studio album, New Amerykah Part One, was released on February 26, 2008 which happened to be Badu's 37th birthday. Badu experienced the worst writer’s block so in order to help her several producers sent her music. New Amerykah Part One is a reflection of the record's political learnings. It features social commentary and themes related to the plight of the African-American community, including urban violence, complacency, and cultural identity. The album received widespread acclaim, and was named by many critics as one of 2008's best records. It debuted at number two on the Billboard 200 albums chart, and sold 359,000 copies in the United States by December 2009.

"You rush into destruction 'cause you don't have nothing left"

New Amerykah Part Two (Return of the Ankh)" is Badu's fifth studio album. It was released March 30, 2010. New Amerykah Part Two has a prominently groovy sound. The album incorporates sampling and live instrumentation, while its more personal lyrics focus on themes of romance and relationships. The album debuted at number four on the US Billboard 200 chart, selling 110,000 copies in its first week. It also entered at number two on Billboard's R&B/Hip-Hop Albums chart. On March 13, 2010,[90] Badu filmed the video for her song "Window Seat", at Dealey Plaza in Dallas, Texas, which is the site of the assassination of President John F. Kennedy. In the video, Badu took her clothes off as she walked until she was nude at the site where Kennedy was shot. This cause so much controversy. Badu said on The Wanda Sykes Show on April 3, 2010, that it was not her intention to insult the memory of the late President John F. Kennedy (JFK): "My point was grossly misunderstood all over America. JFK is one of my heroes, one of the nation's heroes. John F. Kennedy was a revolutionary; he was not afraid to butt heads with America, and I was not afraid to show America my butt-naked truth."

Badu has and will forever have a huge impact and influence in not only the neo-soul genre, but manny other genres including but not limited to  jazz, hip hop, and R n B. Badu is not a conventional artist and she is known for that. She is “an artist and is sensity about [her] sh*t”. Badu is one of my favorite artist and her music has a calming factor that pulls you in. Badu has definetly earned her seat as a legend.