There are many classical African American composers, and singers. Frank Johnson paved the way being the first African American composer to have his works published as sheet music, which were operatic airs, and sentimental ballads. There are many icons who came after Frank Johnson to continue leading the way for more African American classical musicians to try and perform their gift, and compose many pieces that have either been only performed and didn’t have the chance of putting what they performed on sheet music. During the 1946, Camilla Williams became the first black woman to secure a contract with a major U.S opera company. 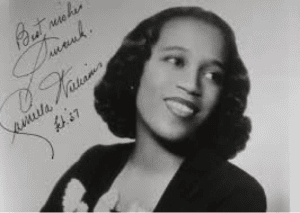 Camilla Williams was a soprano opera singer. Williams studied alongside Geraldine Farrar, a respected soprano opera singer and original star of Metropolitan Opera ‘s Madame Butterfly. During this time, black people, black women, experienced discrimination. Although Ms. Williams had a successful career, she was often cast to play “exotic” characters and wasn’t the first chosen to play leading roles that were originally written for “European”. In 1951, Ms. Williams won the role of Bess in the first recording of George Gershwin’s opera Porgy and Bess. Ms. Williams was also involved with the Civil Rights movement, and met many key activist figures, like Malcolm X. After her career in opera singing, she later became the first African American professor to work at Indiana University’s Jacobs School of Music.