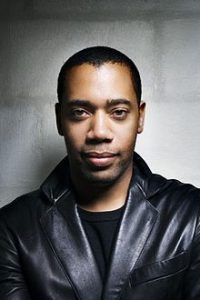 Carl Craig is a music producer and DJ who was a trail blazer within the “Detroit Techno” realm. Carl Craig is considered ” one of the most important names in the Detroit second generation of techno musicians.”

“Craig was often seen as being the most artful and the most willing to engage the rapidly growing shape of techno outside Detroit.” Craig has approached techno using and being inspired by a wide range of musical genres, including jazz and soul.

Carl Craig was born and raised in Detroit, Michigan in 1969. He learned to play guitar and later became interested in club music through a cousin who worked lighting for Detroit area parties. After hearing Derrick May’s radio show on WJLB, Craig began experimenting with recording on a dual-deck cassette player. Craig’s work was later passed and introduced to May’s through someone who knew him. May was impressed, and in 1989 this resulted in Craig’s first professional recording, “Neurotic Behavior.”

Since 1989, Craig has released many albums under a large number of aliases, including “BFC, Psyche, Paperclip People, 69, Designer Music and Innerzone Orchestra.”

In 1992 he released “Bug in The Bassbin”, a track that many regard as being a key influence in the then evolving sound of drum and bass.
Craig has also created his own record label named “Planet E Communications,” which apart from his own work, has released records by well known techno and house artists like Kevin Saunderson, Alton Miller and Moodymann.

Craig served as co-creator and artistic director for the Detroit Electronic Music Festival in 2000 and 2001. In 2001, Craig filed a breach-of-contract lawsuit against festival producer Pop Culture Media. Craig returned as artistic director for the 2010 festival, teaming up with producer Paxahau. Craig continues to be heavily involved with the festival in recent years.