Call It Stormy Monday – The Blues

Despite the love for music that my family has my personal knowledge of the blues goes back to the movie Cadillac Records. The movie follows the story of Chess Records in Chicago Illinois and its prominent artists Muddy Waters, Howlin Wolf, Little Walter, Chuck Berry, and Etta James. While seemingly truthful needless to say my view of the blues was overly dramatized and limited. I barely had any knowledge of the genre.

The title of T-Bone Walkers song “Call it Stormy Monday” alone sums up the blues,  melancholy, sullen, and sad. Born in the deep south the blues came about and began developing around the 1890’s. The blues was a direct response to the total disregard of African American life and the stifling of progressive efforts for people not in the majority. The blues was used as an avenue of expression to speak out against the overt oppression of a people who thought they had gotten somewhere in this country only to be met with Jim Crow laws.  It is noted that previous styles of African American music had some “style of white patronage.” (African American Music 120) However when blues came about it seemed like artists were looking toward “black-folk resources” and looked more toward “black audience approval.” (120) The blues has been described as self-contained and often featured a soloists. These solo artists were typically male and were accompanied by an instrument either “guitar, piano, or harmonica” which served as a second verse. (120) A key sign that it was blues music being played was the level of improvisation where whale songs were made up on the spot. Blues is also defined by the instruments used. The previous instruments listed like the piano and guitar point to the western influence on the blues. However these instruments were not played in the traditional sense, and were often accompanied with “washboards, jugs and kazoos”attempting to reimagine the instrumentation used in Africa. (121) Those instruments gave the music a bluesy sound and in the Blues documentary, we heard that sometimes musicians used knives on the guitar strings to give it a distinct sound. Sometimes players would use the top of a beer bottle to achieve that same sound. Other distinctive characteristics of blues are blues texts, blue notes, and blues forms. Blues texts referred to the “frank, non-sentimental” and extremely expressive lyrics to blues tunes. The Blue Note refers to the “note that falls between two adjacent notes in the standard Western division of the octave into twelve equal intervals. And finally, the blues forms which is the twelve – bar AAB form. The first two lines are the same while the last rhymes and is a futher emplanation of sorts of the first line.

There was also influence from western culture through the structure of harmony using the “multiphrase strophic form” and basic I-IV-V harmonies. But there were also influences of  field hollering which derives from the rural south. Blues performances are usually in a performance setting in the south they took place in house parties or juke joints while in the north they performed in saloons and cabarets. It should be noted that some early artists had in their repertoire older songs and even rags, while newer artists “after 1905” considered themselves strictly blues artists. Blues has been seen as commerical, and by 1912 “five songs were copyrighted with the word blues on them” One being W.C. Handy’s the Memphis Blues. Later aritsts like Ma Rainey began performing these songs and their own. In 1920 “Mamie Smith was the first black vocalist to record blues commercially.” (130) 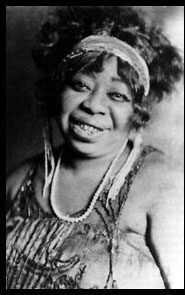 By the 1930’s blues had transformed. The depression led to the death of the traditional style, but also saw the emergence of blues groups. Even the use of the guitar evolved. The guitar became amplified and was played simultainously with harps and recorded directly through a microphone. That piece of Cadallic Records was right. And by the 1950’s we saw the emergence to the soul blues with James Brown and B.B. King. With these later modifications we see where Rock and Roll stemed from with it’s loud guitars and even recreation of some blues songs. However white artists by the 70’s used the blueprint of the blues to “resist against sexual, social, and political restraints.

I notice a pattern through each era of music we study. It seems that out of extreme hardship and dire circumstances yet somehow black people turn it into a beautiful piece of art that lays the ground work for another genre., willingly or unwillingly. I see the close relation to spirituals as both are extremey realistic, however absent from the blues is the desire for the better. While the blues leaned on its predecesors for it’s foundation again we see that it paved the way for early rock and roll, jazz and even contribute to hip hop through “the sampling of riffs.”