Brandy Norwood has been a modern R&B and Pop legend since the 90s! From starring in movies like Cinderella, having her own sitcom Moesha, to selling over 40 million records worldwide. She’s worked and built relationships with legends including Whitney Houston, Diana Ross to Chris Brown and many others. She has also appeared on several shows including ABC reality show Dancing with the Stars, BET comedy series The Game, Love & HipHop Hollywood, sitcom The Soul Man, BET sitcom Zoe Ever After, and many award shows such as BET HipHop Awards, Soul Train Music Awards and the BMI Awards. Glamorously, there’s seems to be nothing Brandy can’t accomplish.

Brandy Norway, born February 11, 1979 was birthed in McComb, Mississippi. Her parents are Willie Norwood and Sonja Norwood. Sonja Norwood was a member of her church choir, Brook Haven Church of Christ, where she later introduced and instrumented Brandy to sing along with her. From there Brandy’s practice with her given talent flourished from there. In 1984 the family moved to Carson, California, just south of LA where a minister offered her father a position in church who was also a gospel singer which gave Mrs. Sonja the thought of Brandy having a chance to make it big. One of Brandy’s biggest inspirations to sing was the late Whitney Houston. Brandy idolized Whitney and once said “when I saw the reactions that people gave her, I knew that that(singing) was something I wanted to do. I want to make people cry and feel exactly what I’m feeling”, “I knew that I wanted to be a star.”

Around age 10, young Brandy began branding herself in local talent contests. This is when she caught the eye of Christopher Stokes, an up and coming producer who witnessed Brandy sing at a talent show. He was immediately blown away and called her “special.” With the two kicking it off, Brandy revealed to Stokes that she did not only want to sing but she wanted to act as well. Stoke soon gave her her shot on the acting stage in a TV pilot he wrote and produced called ‘We Are Family.’ This was her first acting gig but the show never aired or launched so she was brought back to the music stage doing vocals for Stokes new R&B boy band, Immature.

In the fall of 1992, Brandy enrolled at Hollywood High Performing Arts. Brandy was seen as a confident person while at times it came off to others as “being full of herself” says Carolyn DeMirjian, Brandy’s high school counselor. Though so seeming so bright and having a light constantly beaming from above her, Brandy fought personal issues coming up in her adolescence. She suffered from severe depression over her image and looks. She never felt pretty and was constantly the victim of bullying. It would take time for Brandy to match her confidence on the outside with the inside as well.

After her freshman year, Brandy took time off from school to secure a music deal which failed time and time again, resulting in a lot of tears and pain for her. It wasn’t until 1993 where she finally got the chance she’d been looking for, with Atlantic Records. Not too long afterwards Mrs. Norwood, Brandy’s mother, decided to take control of her daughters career, dropping all ties with Christopher Stokes. Mrs. Norwood soon scored Brandy an audition for a new sitcom called ‘Thea.’ Brandy auditioned 12 times before getting the role. This was her first major acting gig. The show aired in 1993 but got little attention. There was lots of tension behind the scenes and so much being placed on Brandy’s shoulders at such a young age(14 at the time) while also fighting low self esteem. During this time Brandy struggled with maintaining her grades while trying to accomplish her dreams and goals. By March 1994, the series ‘Thea’ was cancelled. Even with the show not having great success, Brandy was still able to establish herself as a very talented individual.

Brandy then worked on releasing her first album, Brandy, set to hit stores later that fall. She had two number one hit singles, “I Want To Be Down” my favorite song and “Baby” which went quadruple platinum. She then went on the road, performing opening acts for the group Boys to Men. Her acting level then became everything she wanted as she was now a lead star in the soon to become popular sitcom, Moesha. Moesha was a sitcom based on an African-American family living in the LA suburbs.

In February 1997, Brandy threw herself an 18th Hollywood birthday bash in celebration of a few hit singles and a well accomplished sitcom. Another moment in a lifetime was headed the stars’ way. She gained the opportunity to work with her long childhood idle, Whitney Houston in a film called Cinderella. Whitney would play the grandmother, and it was also Whitney who suggested Brandy to be Cinderella! She would have to work many double days while still filming for the sitcom, Moesha so she was very tired most days. Cinderella aired that November of 1997. Sixty Million viewers tuned in to see Brandy’s take and role in such a historic movie and tale.

Brandy’s second album, Never Say Never hit stores in June 1998. “The Boy Is Mine” another one of my favorites, duet with Monica became an instant hit and climbed to number one on billboard. The single brought Brandy her first Grammy award for best R&B song by duo. Due to so much pressure and exhaustion, Brandy’s mental and physical health declined. She began eating less, developing an eating disorder. Having so much work to do began to really take a toll on her body physically and mentally. But she would soon get the time and space she needed away from the cameras and stage. On June 16th, 2002 the Singer had her first child, her daughter Sy’rai Iman Smith with romantically involved producer Robert Smith. The two would later get separated about a year after their daughter was born.

Tragedy struck when two of Brandy’s good acting friends, died. One passing in a car wreck and the other passing by gun violence. Not only that, Brandy’s romantic life never seemed to hit home with any of her lovers, one being she lied about being married to. In 2007 Brandy was involved in a fatal accident that left one woman dead, though the accident was her fault she was never charged. To get over all of the tragedies, Brandy did Brandy and began to work again and get back into the spot light. She became a judge on America’s got talent. She then began to get back into the studio to collaborate with her brother Ray J on an album. All of this impressed her fans and let the world know that she was fine and feeling well and also looking well too. She is back.

Life has been a rollercoaster for the singer and actor Brandy but even so, her impact on music and the word itself will always have its place. She is a star on her worst days. Brandy is a very talented, resilient, hardworking, centered woman who pushed through the fire. She is truly a poster child for tragedy bringing along growth. Her music and her social media presence has been a tool to help me push through depressions. I’ve spent many of weekends watching Moesha back to back, and her version of Cinderella is one of my favorite movies! One of my dreams is to be able to meet Brandy, collaborate with her in some kind of way, and tell her how she has blessed my life! 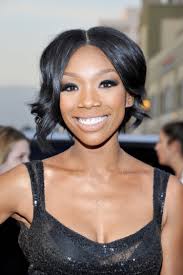 Beyond Her Wildest Dreams: Brandy On Learning Her True Self At 40