It was said around the time of 1890s in the deep south began the spread of a Blues. Throughout the cities of New Orleans, Memphis and St. Louis a new type of song that often expressed African American attitudes through lyrics. Often in blues lyrics there is emotion and feelings expressed most commonly in first person to tell their or someone else’s story. Within our text, “ African American Music” the lyrics are “realistic opposed to idealistic, non-sentimental, and serious” in addition at times can contain humor. As blues became more popular in southern states, the amount of shows and concerts , showcasing local artists, dancers, composers arised. Blues entered this new musical era and influenced many musicians. Comedians and managers within black communities; showing and giving confidence to the communities while being in a time of Jim Crow Laws. Some influential figures in the blues world were “Ma” Rainey, Bessie Smith, Mamie Smith and Ida Cox and many more; they usually performed at  juke joints and urban rent parties. 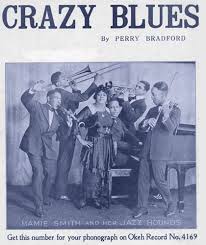 Sadly, like everything else African Americans have created it is usually stolen and modified to European standards without recognition.  Country obtained the certain aspects of blues music like yodeling that became popularized by Jimmie Rodgers. Today blues has influenced and has been taken from by rock and roll performers especially Elvis Presley, Jerry Lee Lewis and Carl Perkins. You see blues riffs sampled in rap music and country and rock and roll. Though parts of the blues have been taken and integrated through music genres around the world,  the true blues will know its home lies in the South.

I like the blues and as I grew up often heard it within my household, I believe it is unfortunate, blacks with the many things we have created still lack our recognition. However, I enjoy blues and the different stories that were told.