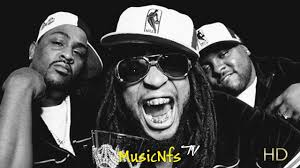 Atlanta is regarded as Dirty South’s capital within the southern rap movement in the 2000s. Atlanta got its status from being a city with opportunity for African Americans. In the 1990s, Atlanta was one among several southern cities with a burgeoning rap scene. In the  2000s, the city’s rap scene outsold that of Memphis, Houston, New Orleans, or Miami. Atlanta’s position as the rap capital of the South was solidified with an increasing number of Atlanta-based artists — including Ludacris, T.I. Gucci Man, and Crime Mob. Atlanta’s crunk music scene helped put the city on the map. Pioneered by the groups Lil Jon & The East Side Boyz, YoungBloodZ, and Ying Yang Twins. Crunk music was an integral part of the Dirty South movement.

Lil Jon & The East Side Boyz  were prominent artists in the Crunk music movement. The music was full of energy and raunchy lyrics.

The Atlanta based duo Outkast’s music strayed away from the styles of other southern artists. The group took a more lyrical and melodic approach to their music.

The six member group Crime Mob was a part of the Crunk movement. Members Diamond and Princess were some of the few women that found success within the crunk movement.