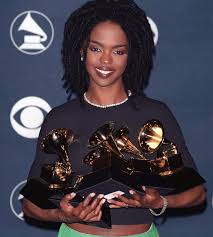 Lauryn Noelle Hill was born on May 26 1975 in South Orange, New Jersey. She is an American singer, songwriter, rapper, record producer, and actress. She is known for being a member of the Fugees and for her critically acclaimed solo album The Miseducation of Lauryn Hill, which won numerous awards and broke several records.

Hill grew up listening to Curtis Mayfield, Aretha Franklin and Stevie Wonder. She started her career as a member of the Fugees. Hill met Pras Michel through a mutual friend in high school and the two came up with rap group name. Michel’s cousin, Wyclef Jean joined the group and the trio released Blunted on Reality and then released The Score. Brimming on post-colonial discourse and invoking the spirit of reggae, avant-garde hip-hoppers—the Fugees album included traces reggae, folk, rock, soul, and Creole. The music of the Fugees symbolizes the interconnectedness of the African diaspora. 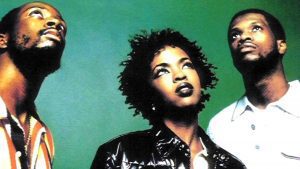 After the group disbanded, Hill released The Miseducation of Lauryn Hill and it remains Hill’s only solo studio album to date. It received massive critical acclaim, highlighting a representation of life and relationships and showcasing a contemporary voice within the neo soul genre. The album debuted at number one on the U.S. Billboard 200 and has sold approximately eight million copies. It included the singles “Doo Wop (That Thing)” which was one number, “Ex factor” which became her biggest solo hit in the UK and “Everything Is Everything”. At the 41st Grammy Awards, Hill earned five awards. During this time she won numerous awards and became a common sight on the cover of magazines.

Soon afterward, Hill dropped out of the public eye because she was dissatisfied with the music industry and suffering with the pressures of fame. Her last full-length recording, the new-material live album MTV Unplugged No. 2.0 (2002), sharply divided critics and sold poorly compared to her first album and work with the Fugees. Hill always had radical view and used her artistry to discuss foreign policy and violence in the black community.