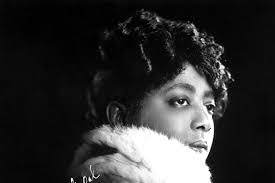 The Blues was a time for personal expression of emotion, personal struggles, and showcasing a new style of music that was not seen previously.  This secular folk music originated in the Mississippi delta in the south.  The style of the blues was mainly revolved around vocals.  Lyrics generally expressed the musician’s melancholy while also displaying unique rhythmic techniques such as the bending of guitar strings, and the syncopation of various notes in the piece.  Many significant musicians began to flourish at this time.  People such as B.B. King, Muddy Waters, and Robert Johnson, gained plenty of attention during this era. However, the most inspirational face during the blues was no other than Mamie Smith.  Mamie Smith is the most inspirational person in the blues period because she paved the way for other classical blues women from the 1920s and even then, on.

Who is Mamie Smith?

Mamie Smith is a famous performing artist and actress, known for her pop and blues music during the early 1920s.  Smith was born in Cincinnati, Ohio in 1883 where she quickly showed signs of talent from a young age. By the time she was ten, she began working with well-known musicians, touring with Four Dancing Mitchells. At age twenty, she moved to Harlem, New York where she got married and began working in clubs.  Not long after, she began to receive a reputation as a talented singer in the night clubs.  Her face and voice became very familiar to the city of Harlem at the time. While doing so, she managed to also perform as a dancer along with the Tutt Whitney Smart Set dance company.  Overall Smith was a well-rounded artist who flourished in many different areas. 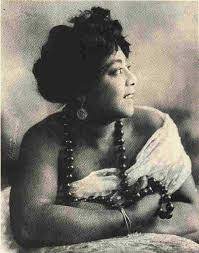 In 1918, Smith took her talents to the theater, where she starred in the Maid of Harlem, a musical. The producer of the show, Perry Bradford later sot out Mamie to record some of the songs he had written. In New York, Smith and Bradford were able to record, “That Thing Called Love” and “You Can’t Keep a Good Man Down”.  This was a major step for Smith, whom was already gaining positive recognition for her efforts.  However, a major turning point for Smith was the recording of “Crazy Blues”.  The song is considered to be the first blues song ever recorded.  Mamie smith was the first African American female to create a phonograph recording.  These recordings were a major point in the history of music because it shows the emergence of black female singers in the popular African American music culture. This alone aided in paving the way for future female blue performers and musicians.

Mamie Smith was known for her stage presence.  She presented an elegant aura which resulted in audience member’s captivation during her performances. She had a commanding stage presence which lead to the spread of concert blues.  Her welcoming spirit can be seen in videos below.  Smith continued to create records throughout the year and soon transitioned her musical style into the jazz period.