William Grant Still was born May 11, 1895, in Woodville, Mississppi and died December 3, 1978,in Los Angeles, California. He was a well-known American composer and conductor in addition to being  the first African American man to conduct a professional symphony orchestra in the United States. He was best known for his Afro-American Symphony (1931).

Still studied composition at Oberlin Conservatory of Music in Oberlin, Ohio, as well as under George Whitefield Chadwick in Boston, and later under Edgard Varese. In the 1920s, he worked as an arranger for the bandleader for both Paul Whiteman and W.C. Handy. His early orchestral works included Darker America (1924)

and From the Black Belt (1926) for chamber orchestra.

Many of his compositions from the mid-1930s are heavily influenced by jazz band. He made considerable use of material in the African American style and preferred simple, commercial harmonies and orchestration.

William Grant Still used his concern with the position of African Americans in American society in many of his works. Some examples can be found in the Afro-American Symphony; the ballets Sahdiji (1930)and Lenox Avenue (1937); and the operas The Troubled Island (1938; produced 1949), with a libretto by poet Langston Hughes, and Highway No. 1, U.S.A. (produced 1963 and 1977). In 1936 he conducted at the Los Angeles Philharmonic. 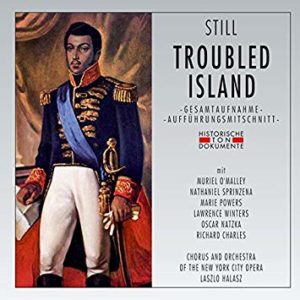 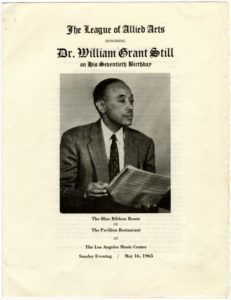