Who is Dinah Washington?

Born August 29, 1924 in Tuscaloosa, Alabama, was arguably one of best artists of our time. As a child, Ruth Lee Jones, later named Dinah Washington, moved with her family to Chicago, where she mastered the piano under the influence of her mother, who played at St. Luke’s Baptist Church. During this early stage of her development, Washington’s teachings was based on gospel music and spirituals. She sang and played the piano, for church choir, igniting the beginning of her musical career in 1939 where she began play as a jazz pianist and vocalist in various Chicago nightclubs, in addition to touring with Sallie Martin’s gospel group.

She began to perform with the acclaimed gospel pioneer Sallie Martin in 1940, with whose choir she toured the gospel circuit for a while. Although this is true, secular music had already had an effect on the young artist. Washington had won her first prize at an amateur contest, also known as a talent show, at Chicago’s renowned Regal Theater even before joining Martin’s group.

Her idol, she admitted, was Billie Holiday, who she admired not only for her blues treatment of popular tunes but also for the fact that Holiday seemed to be making money as a singer whereas she, was making very little.

With this experience she earned the attention of booking agent Joe Glaser, and Joe Sherman who ran the Garrick Stage Bar. She appeared at the Garrick in a featured billing. This brought her to the notice of prominent bandleader Lionel Hampton, who was said to have immediately recognized Washington’s talent in a Chicago night club, “the Three Deuces”, and signed her to perform with his band at the tender age of 18 in 1943.

Hampton hired Washington to be the lead singer for three years. During this three-year musical journey is where Washington adopted the name Dinah Washington, completely different from her birth name, Ruth Lee Jones (Talevski). Hampton claimed to have given her the stage name of Dinah Washington, although other accounts credit either Glaser or Sherman with the inspired choice (Joravsky).

Although Washington would not mix sacred and secular in her performances, as she refused to include gospel in her repertoire, her gospel roots could still be heard in soulful delivery and melismatic touches when singing. This characteristic is what sets her apart from many, as she brought an emotional depth to her material(Ginell).

Washington has been acknowledged for her excellent voice control and unique gospel-influenced delivery.

She had her first hit, “Evil Gal Blues,” recorded under Keynote Records. Both the song and its follow-up, “Salty Papa Blues,” appeared on Billboard magazine’s Harlem Hit Parade, which was just the start for many. During her three years with Hampton’s band, Washington earned recognition for her live performances. It was found that in Hampton’s memoir he wrote that he always had her perform last, as her performances “eclipsed anyone who followed her”(Giarratani).

In 1946, Washington left Lionel Hampton’s Orchestra, signing as a solo artist with Mercury Records. That year, she recorded her anthem “Slick Chick on the Mellow Side” for Verve Records. She began to be billed as “The Queen of the Blues,” although she protested to the press that this title belonged to Bessie Smith. Like Smith, she was known for her bawdy and suggestive songs, also known as “dirty blues”(Giarratani).
In the mid- to late-1950s, Washington recorded with many of the most acclaimed jazz musicians of the period. These musicians included both drummer Jimmy Cobb and saxophonist Julian, commonly referred to as Cannonball, Adderly. Washington’s 1954 album, Dinah Jams, recorded her Los Angeles-based sessions with the newly formed Clifford-Brown Max Roach Quintet and guest trumpeters Clark Terry and Maynard Ferguson for EmArcy Records. In March 1955, she recorded the album Dinah Washington: For Those in Love, also for EmArcy. Arranged by Quincy Jones, the jazz-based collection of standards included “This Can’t Be Love,” “I Could Write a Book,” and “You Don’t Know What Love ls.” In the liner notes, jazz scholar Dan Morgenstern compared her to Billie Holiday.
Primarily a jazz vocalist, she performed in a variety of styles, including pop, rhythm and blues (R&B), and country, to name a few. Between 1949 and 1955, she had 27 Top Ten hits on the R&B and Pop charts. Her signature interpretations of the songs “Unforgettable” and “What a Difference a Day Makes” are in the Grammy Hall of Fame.

In his 2001 biography Q, music legend Quincy Jones vividly describes Washington’s style, saying she “could take the melody in her hand, hold it like an egg, crack it open, fry it, let it sizzle, reconstruct it, put the egg back in the box and back in the refrigerator and you would’ve still understood every single syllable”(Cohodas).

Contemporary singers like Ella Fitzgerald and Sarah Vaughan, who also straddled jazz and pop music like Washington, never tried to sing the low down blues as Washington did; neither did Rosemary Clooney or Nancy Wilson.

This is is what made her one of a kind.

Washington has had a huge influence on R&B and jazz singers who have followed in her wake, notably Nancy Wilson, Esther Phillips, and Diane Schuur.

Washington was known for her extreme confidence, sassiness and personality, much of which was shown during her performances and clothing worn throughout her career, on and off stage. 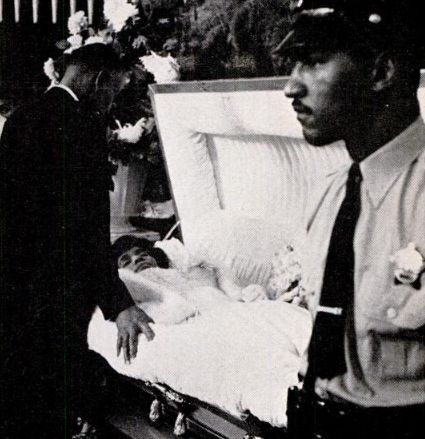 Despite the  troubles  that she encountered,  dealing with her insecurities concerning her weight, and many failed marriages, six to be exact, she still managed to remain confident and boisterous in the public eye. She showed why she was supposed to be the star that she was destined to be. Dinah Washington will always remembered for her amazing delivery, voice, style, personality, and sass that she brought everywhere she went.

Recordings by Dinah Washington were inducted into the Grammy Hall of Fame, which is a special Grammy award established in 1973 to honor recordings that are at least twenty-five years old, and that have “qualitative or historical significance.”

Rock and Roll Hall of Fame