In 1724, the French implemented “Code Noir” in the Louisiana Territory which gave enslaved people Sunday as a “day of rest”. The enslaved people used this day to congregate in remote and public places, practicing ceremonial rituals such as voodoo, religious ceremonies, dancing or singing. When the Spanish took over Louisiana from 1763 to 1802 they relaxed”Code Noir” and allowed enslaved people to set up markets,sell food, and exchange good and services. Many slaves used this money to buy their own freedom through a process called coartacion, which established a court arbitrated and legally binding price for their families and the freedom of other family members.

The state of Louisiana was very unique because they are some of the only ones who did not prohibit heir culture. African food, language, music, traditions, and homemade musical instruments. It was not until 1817 when the mayor of New Orleans issued an ordinance that restricted the blacks to a certain area just outside of Rampart Street that is now know as Congo Square.

Before it was known as the Place des Negres, more commonly known as Place Congo. After the Americans gained control the area became known as Congo Square. 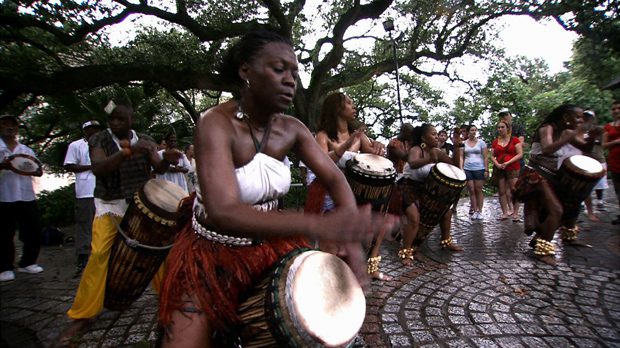 As many as 600 slaves would gather and celebrate their culture without havoc, and it became a sanctuary for visitors who wanted to do African dancing and music. New Orleans grew around Congo Square and became the epicenter of the city which is now known as the French Quarter. Until the 1880s, the Congo Square influenced generations of musicians who lived around it, and became the musical heart of New Orleans.

The Mississippi River would be considered the artery that carried the music and musical innovation throughout the country. The influence over music  traveled from Mississippi’s tributaries to musical cities from Memphis to St. Louis, from Kentucky to Minnesota, and Chicago to Pittsburgh. People who visited the Congo took their experiences home with them and implemented them in their respective communities. The port served as apart of triangle of trade between Mexico, Haiti, and Cuba. This trade route carried more than goods and services. This triangular trade not only carried people, culture, music, and musicians, lengthening the reach and infuence of Congo Square’s music.

After the Civil War, Sunday gatherings in Congo Square  began to raise more of  a conflict with white city leaders. They attempted to suppress the gatherings, even going as far as officially renaming the Congo Square to “Beauregard Square” after post war civil leader and former CSA general. However, the residents of Vieux Carre and Faubourg Treme still referred to the area as the Congo Square and as formalized in 2011 by the New Orleans City Council. The original New Orleans Jazz and Heritage Festival was held in Congo Square in 1970, but as the crowd grew it was moved to the New Orleans Fair Grounds race track.

Although the Sunday gatherings eventually came to a cease, the vibrant traditions,  music, and dances remained. Freed people of color began to  form social clubs and musical clubs in different halls and meeting areas around the city. These venues became symbolic of New Orleans jazz music like Economy Hall ans Preservation Hall. Also, during this time New Orleans had a world-famous Opera House, so the musicians of New Orleans absorbed opera music into the mix that was the music of the city.

Elements of the Congo

One of the most documented dances but white observes, although not known to be the most common, was the “Calinda”. According to the onlookers, large groups of slaves would assemble in the hot,  humid, heat dancing to the beat of bamboulas, gourds, and banjos played by African musicians.

Revival of the Congo

After the Union Army captured New Orleans, General Butler, the military commander in charge of New Orleans, enforced the rights of free people of color. This encouraged the steady flow of musical innovation through New Orleans, and during this time some of the first brass bands were formed. At the beginning of 1910, these bras bands were playing jazz and the musicians from New Orleans and went on to Mississippi.

Efforts were made to disrupt the Congo Square, because it was primarily dominated by people of color. Buildings were constructed close by and an revamping of the Treme neighborhood in the 1960s, however the Congo stood against this.

The Congo was and still is a place where you can the reverberations of our ancestors and go to be inspired by all of our history. You can hear traces of the Congo square in the music we listen to today. Plenty of musicians flowed out of New Orleans, such as Louis Armstrong, Jimmy Durante, Fats Domino, Lil Wayne, and Master P. All of these musicians have one way or another been influenced by the Congo.