Classical music came about for African Americans a little bit before The Civil War. In certain slaves states lied the few classically trained African Americans who worked professionally, and this number increased once emancipation took place. A selected few were able to study at universities to learn to write in larger musical forms like operas and symphonies after The Civil War. Classical music can be described through the melody and the soft tones when listening to it. Often uses piano or a variation of instruments within orchestras, with moderation and control. Classical music influenced the social world like other music did by showing another creative aspect.

Within the black community black symphonies impacted black folks by telling African stories through the sounds of music. Some important composers were William Grant Still,  Shirley Graham and Clarence Cameron White who was a very influential composer of the Harlem Renaissance. With every genre there has been a lack of inclusion of black people, particularly when it comes to the credit of their work.  Black composers brought different forms and styles that after the Emancipation folkloristic elements, that were and could be easily taken. Rock and even some pop songs today take some elements of classical music, with artist like Lady Gaga and even some believe within in Prince’s music. I personally enjoy classical music when I just want to relax or do homework while having so music in the background. 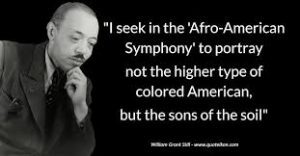