What is it about the things Black people create? That music for us, by us. Well funk was definitely that. Founded in the mid 60’s, Funk was created by Black Americans who wanted to have some good ole fun. Funk was an entirely new sound, one that focused less on melodies and chords, and more on rhythmic tunes, the groove, and a banging bassline. With influences from many genres, like the extended chords in Bebob, and the soul founded in the Blues, Funk was authentically Black.

Today’s music has been so heavily influenced by Funk― and every modern popular hip-hop and R&B musician should thank the legendary James Brown. Brown developed his own type of feel and groove, and gave a new musical importance for the downbeat, which is the first beat on the bar. On top of that, Funk emphasized syncopation of each bassline. Funk originally became a musical term in the 1900’s with Jazz, where it was described as something that was raw and deep. True to the soul of the musician. It later would go on to describe the genre we love now, as it light, fun, danceable, and heartfelt.

Funk was made in a time where Black people were finally coming into their own in America. They were fighting for what they wanted and finally getting a great taste of true freedom. The emergence of Funk can almost be compared to the way Whites were partying to (our)swing in the roaring 20’s. Black people were proud to be Black, and were having a great time dancing to their Black music. Artists like George Clinton, Sly and the Family Stone, and Kool and the Gang were making music that felt good and made any listener want to get up and dance a little. On top of that, Funk was inclusive. Critic Cheryl Keyes explains it as “”She Was too Black for Rock and too hard for Soul”. Women such as Chaka Khan, Lyn Collins, and Betty Davis were forces that extended Funk. However, many only account for the successes of men in this genre, and any genre of music really.

Hip-Hop as we know it would not be anything of what it is now without funk and the rock&roll sound. The sampling that goes into these songs we love today, majority of them come from Funk. It is said that James Brown is the most sampled artist of all time, with P-Funk as the second. On top of that even the styles of rap are influenced by Funk. Today’s rap relies heavily on the beat, what makes people feel good, want to bob their heads, and dance. Many of the famous rappers today do not even say much of anything, but can shout a good adlib and ride a baseline. All of that was done in Jazz scatting, but perfected with Funk. As long as people were grooving, and feeling good, the job was done. Rick James, pioneer Funk artist for the 80’s, sums up Funk perfectly when he says, “…Peace, Love, Groovy”. 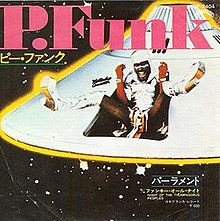