Musical theater by the 1890’s in America was a genre completely powered by white people. Any form of representation of African Americans was once completely seen by the white lense and was usually presented in the form of Black face or through coon songs. However, in 1898, William Marion Cook and Bob Cole brought Black art to Broadway. Their rivalry can be one compared to Booker T. Washington and W.E.B. Dubois, in loue to their thoughts regarding Blacks in white spaces. Cole felt that Black people would be most successful in musical theater if they competed against the white performs, and showed them that they could perform in the same manner. Cook on the other hand believed that Black performers would be most successful if they created their own style, and did not bother themselves with competing and imitating the white people.

Through the beginning of the Black presence in musical theater, it is obvious of what the white audiences found entertaining. Cakewalks like Bert Williams and George Walker’s The Gold Bug, found great success as the audiences loved seeing the Black performers cakewalk. So much so, that many thought that Williams and Walker were the originators of the performance, which actually finds its origins in slavery, where enslaved people would dance around, imitating their owners in hopes of winning a cake. So clearly, white audiences found entertainment in Black people performing roles such as mammies, cakewalkers, coons, and really anything where they could make a fool of themselves.

Fortunately, musical theater has progressed to be something of much more inclusive, compared to its beginnings. Musicals such as Ain’t Misbehavin’, Passing Strange, Ain’t Nothin’ but the Blues, The Color Purple, and Carmen Jones gave Black performers the proper roles they deserved. While Broadway is primarily white dominated, many musicals formed huge praise due to their originality and authenticity. Sometimes the authentic Black sound gets watered down to please the white ears, but many Black written and performed acts hold true authentic love for the negro sound. 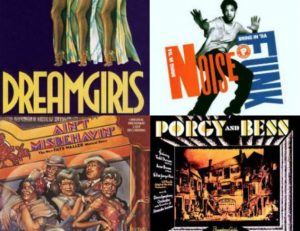