Ulysses Kay was an African American Composer, Conductor, and Professor. Kay was born in January 7,1917 to a musically talented family. He learned Piano at 6 with William A. Ferguson. He studied the Violin at 10 and the alto saxophone when he was 12. He then organized a quintet with friends for which he composed music. Kay worked for Broadcast Music, Inc. from 1953-1968 as a music consultant. Throughout his life, he composed approximately 140 musical compositions for orchestra, chorus, chamber ensembles, piano, voice, organ, and band. He also composed composed 5 operas and scores for film and television. On May 20, 1995 at the age 78, Ulysses Simpson Kay died due to complications of Parkinson’s disease.

Kay’s music is Kay’s music is characterized by melodic lyricism and tonal orientation (i.e., organized around a given tone as a focal point) supplemented by chromaticism (use of all tones of the chromatic scale, whether or not they belong to a particular key). In his later works he also used harmony, or chords built of tones a fourth apart, rather than the usual third. 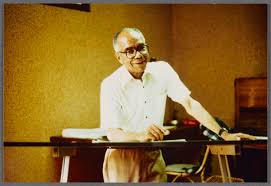