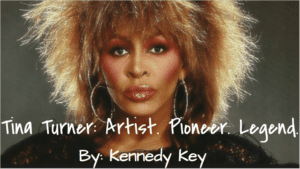 Tina Turner is one of the most influential musicians and performers of the twentieth century. She revolutionized what it meant to a multi-talented and multi-faceted artist especially as a Black woman. She paid her due diligence as an R&B artist, a soul artist, a Rock and Roll artist, and even a pop artist. Turner successfully maneuvered transitions between these genres throughout her career, which paid off she is considered a living legend in the music business. She has many accolades that speak to her talents: Turner won eight (8) competitive Grammy Awards in addition to three (3) Grammy Hall of Fame Awards, she was inducted into the Rock & Roll Hall of Fame in 1991, three (3) of her most recognized songs, “River Deep – Mountain High”, “Proud Mary”, and “What’s Love Got to Do With It” were also inducted into the Grammy Hall of Fame, along with her own star on the Hollywood Walk of Fame. One of the main reasons why her music has endured throughout the years is because her professional work had strong ties to her personal life. Whether that be her early introduction to music through going to church with her grandparents or her abusive relationship with husband and business partner, Ike Turner, Tina Turner’s personal gains and setbacks often stemmed from what occurred off stage. Tina Turner’s personal struggles and gains were the main factors attributing to her success in the various genres she explored, along with the decisions to alter and develop her musical artistry.