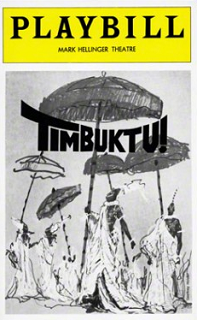 Timbuktu! is a musical that premiered on Broadway at the Mark Hellinger Theatre on March 1, 1978, and closed on September 10, 1978. Based on the book by Luther Davis, Timbuktu had a total of 221 performances. It featured lyrics by George Forrest and Robert Wright The musical is set in 1361, in Timbuktu, in the Ancient Empire of Mali, West Africa. The production starred Eartha Kitt as Shaleem-La-Lume, William Marshall as Hadji, Gilbert Price as the Mansa of Mali, Melba Moore as Marsinah, and George Bell as the Wazir. It was directed, choreographed and costume designed by Geoffrey Holder.

This musical was very interesting . This was my first time watching a film on Timbuktu. I could only find clips of the musical which made it kind of difficult to understand , however the reviews were raving.