The Tuskegee Institute Singers were created in 1914 as one of the famous University Jubilee style quartets. The first quartet consisted of students Hiram H. Thweatt, John F. McLeMore, Warren Logan, and Robert H. Hamilton. Hamilton led the group and arranged many of their performance pieces.

A capella: this is a musical style where the performers sing without musical accompaniment. In some instances, the performers use their voices as instruments. A capella focuses on harmonizing and melodies. In the past, it was forced upon African Americans because their instruments were taken away on plantations. It is a sign of resilience because despite not having instruments, we still made music and were able to influence all the rest of the music genres.

Beat/Rhythm: the beat or rhythm were the aspect of the songs that classified them in the Jubilee Quartet genre instead of the Negro Spiritual genre. These systematic arrangements of background sounds usually made the songs a faster tempo, and less melancholy.

Four Harmonies: the four harmonies that make up the Jubilee Quartet Genre are the lead baritone, the bass, first tenor, and second tenor. These parts sing together to create the quartet sound.

In Jubilee Quartets, there was no ad-libbing. It was strictly memorized and arranged performances.

The Fisk Jubilee Singers from Fisk University developed Negro Spirituals into the specific Jubilee Quartet genre. They were the first ones to commodify this type of music, and the Tuskegee Institute Singers followed soon after. They traveled around performing and made money off of their shows, and this helped support their schools. An interesting fact from their performances is that white people enjoyed going to these Jubilee Quartet performances, so they had part in the commodification and assisted in funding the schools through the performances. 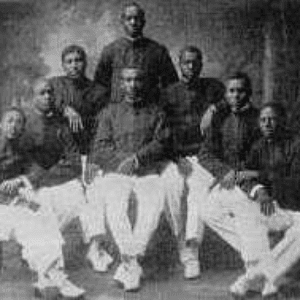 The Tuskegee Institute Singers deserve to be written in history as one of the grassroots jubilee quartets. Although they took techniques from the Fisk Jubilee Singers, they ended up developing their own style within the Jubilee Quartet Genre. More of their work can be found at the Library of Congress National Jukebox online site.