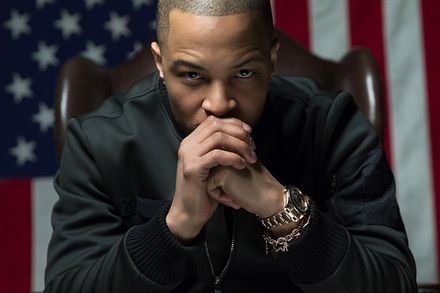 Clifford Joseph Harris Jr. also know as T.I. or T.I.P was born September 25, 1980 in Atlanta, Ga. He started rapping at the age of nine. In 1999 at the age of ninteen he got his first record deal with Arista Records subsidiary LaFace Records. His debut album “I’m Serious” was released in 2001. Although his sales were decent he quit the record label and started his own called “Grand Hustle.” With so much exposure after the release of his second underground album “In Da Streets,” T.I bega to get noticed by other record labels. He eventually signed to Atlantic Record and worked hard to put out another album in 2003. With all the hard work he put in to his music T.I. became known as the “King of the South”.

T.I. is a great artist due to the speed, rhythm, and flow of his music.  He raps some of the hottest bars ever heard flawlessly and effortlessly. The messages he gives through his music are uplifting and guide lost souls.Even though he has been incarsarated T.I. lets you know that things will get better over time. His wide vocabulary also makes him stand out with his music while still keeping it street like he did on his song “Live Your Life” where he says “I’m the opposite of moderate, immaculately polished with the spirit of a hustler and the swagger of a college kid. Allergic to the counterfeit. Impartial to the politics. Articulate, but still will grab a ni**a by the collar quick.”

T.I. has been through a lot over the past few years but he has also matured and opened his eyes up to see that African Americans are oppressed. He has become an activist in his community where he stands with others to fight against police brutality, racism,  and oppression. He uses his voice and his rap career to encourage others to get involved in the communities to stop gun violence against African Americans. He has led Black Lives Matter Protest and also encouraged African Americans to get involved and participate in elections. He also released an album in 2016 called “Us or Else” which focused on the deaths of Alton Sterling and Philando Castile. The album was a response for social injustices happening in the communities. Later that year he released another album called “Us or Else: Letter to the System” to make it clear and show that he was apart of the movement.

T.I’s first album “I’m Serious” released in 2001 sold 163,000 copies. T.I has released nine albums and seven of them has reached top five on the U.S. Billboard 200 chart. A few of his most successful hits were “Whatever You Like,” “Live Your Life,” and etc. He also featured on song that went international such as Destiny’s Child “Soldier.” One of T.I’s most successful albums was “Urban Legend which sold over 1.3 million copies and went double platinum.

In my opinion T.I. is a great artist. He is one of the first artist to combine hip hop and trap music making “trap” a sub genre for hip hop. His music has different levels to it. He can rap about his past lifestyle when he use to sell drugs and be in the streets, he can be romantic and rap about his wife and why he loves her, or he can focus on societal issues. Either way he has made a huge mark on hip hop for the early 2000’s. With the help of his rap career he has been able to give back to the community he has grown up in and save it. Also, the fact that he has such a broad vocabulary makes him stand out because he always use words that most people may not know causing you to look up the meaning of them. Overall I do think he has earned his title as “King of the South.” He has worked hard for it and his music plus his trials and tribulations show that. He has also influenced a lot of artist such as Gucci Mane, Shawty Lo, Young Jeezy, etc. You can hear it in their music they all resemble T.I. and they all are trap music artist which T.I. was the originator of.