The Soul Stirrers: The Rockstar Quartet

The Soul Stirrers was one of the most influential quartets of their time. Their unique sound has impacted R&B, doo wop and rock music and they are most well known for being the group that launched legendary singer Sam Cooke’s career.

The Soul Stirrers were formed around 1930 in Trinity, Texas by Senior Roy “S.R.” Crain during his teenage years. He wanted to form a singing group with some other teens he went to church with. After one of their first performances, an audience member came up to Crain and told him that their performance “stirred his soul”, thus the group was born. The original quartet consisted of Crain, R.H. Harris, Jesse Farley and T.L. Brewster.

In the 40s, the group competed for popularity against the Pilgrim Travelers and the Five Blind Boys of Mississippi singing gospel music. They performed at several USO shows and even appeared on the White House lawn for Franklin Roosevelt and Winston Churchill. They eventually strayed from singing traditional spirituals and gospel music. Also, Harris left the group in the early 50s and went on to sing in other gospel groups. He was replaced by Sam Cooke, who was a still teenager at the time. In the years that followed, the group would reach the height of their success. 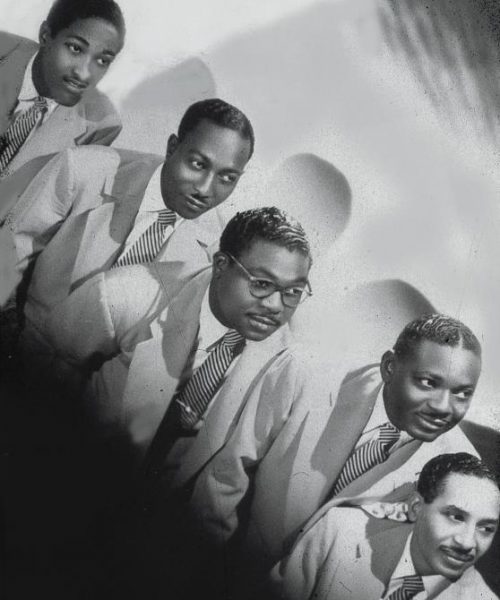 The Soul Stirrers were the first jubilee quartet to have two lead singers: one singing high and sweet and the other singing coarse and low. This group structure allowed for dynamic composition and fresh renditions of classic songs. They sang with more emotion that was common for most quartets and snuck innuendo into their lyrics, blurring the lines between religious and secular music and laying the groundwork for rock and R&B artists such as James Brown. Cooke’s voice and charm coupled with the group’s original sound lead them to massive success. Some of their hit songs include “By And By” (which was their debut song for Specialty Records) and “Jesus Give Me Water” (which was their first song with Sam Cooke). Their song “Peace In The Valley” was even recorded and performed by Elvis Presley. In 1957, Cooke left to pursue a solo career, though he featured the group as background singers in some of his solo music. He was replaced by Johnnie Taylor who formerly sang in the Highway Q.C.’s, another jubilee quartet. With Taylor as the new lead vocalist, they recorded the song “Stand By Me Father” (produced by Cooke), which was later adapted into the classic “Stand By Me” by Ben E. King.

The group eventually lost traction when members kept switching in and out and one of the members was even killed. They were inducted into the Rock and Roll Hall of Fame in 1989 and the Vocal Hall of Fame in 2000. A version of The Soul Stirrers continued to perform until the early 2000s.

The Soul Stirrers was an important group in the history of music. Not only did they help bridge the gap between secular and religious music, but they also jumpstarted Sam Cooke’s career. Their influence can be heard in many groups and solo singers during the height of Motown, the rise of rock n roll and beyond.