The Smooth Musical Stylings of the Isley Brothers. 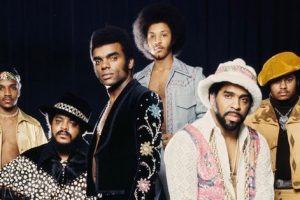 Early life/ History of the Group

The first generation of Isley siblings was born and reared in Cincinnati, Ohio.Their father encouraged his kids to begin singing, as he himself was professional vocalist, and their mother a church pianist. Originally the group was a gospel quartet comprised of Ronald, Rudolph, O’Kelly, and Vernon Isley. Though after Vernon’s death in 1955, to a bicycling accident, Ronald Isley then became trio’s lead vocalist. In 1957 the group went to NYC to record a failed string of doo wop singles.

History of the Group Cont…

Two years after they got to NYC, the group covered a popular radio tune then got spotted by an RCA executive and soon after signed.Their classic call and response “Shout” failed to reach the pop Top 40 on its initial release, it eventually became a classic.But success still alluded the Isleys until they left RCA in 1962 when they had another hit with their cover of the Top Notes’ “Twist and Shout”.

When the group was touring in 1964 they recruited a young guitarist, who would later go by Jimi Hendrix. He in fact made his first recordings with the Isley’s, including the single “Testify”. [embedyt] https://www.youtube.com/watch?v=FUdYp-6a4RA[/embedyt]

The Struggle to Success in the Music Industry

In 1965 they signed to Mowtown record label, Tamla. At this time they joined Holland-Dozier-Holland writing and production team which partnership birthed “This Old Heart of Mine (Is Weak for You)”, which was a huge success barley missing the pop Top 10 charts. [embedyt] https://www.youtube.com/watch?v=U_9M6kRfJes[/embedyt]

Continued Struggles in the Industry

Though “This Old Heart of Mine (Is Weak for You)” was a success that was the groups only hit on Mowtown. After the ups and down the groups faced in the states they realized the market for their music might be better received overseas. The group then relocated to England in 1967, to try to make it in the european market.

Success in the States

after years of writing their own material, the group felt stifled by the Motown assembly-line production formula, and when they finally returned stateside in 1969, they had left behind Tamla to re-locate the T-Neck label. The groups next release, the funk song “It’s Your Thing,” hit number two on the U.S. charts in 1969, and became the band’s most successful record. That year the group also added new members, brothers, Ernie, and Marvin; brother in law, Chris Jasper, and Everett Collins. As the 70s approached the group began to incorperate more rock elements into their sound.

In 1973 the group struck gold again when they released their rock-fuck fusion cover of their very own “Who’s That Lady” retitled “That Lady, Pt. 1”. That year the group would also release an album that was wildly successful 3+3.  [embedyt] https://www.youtube.com/watch?v=7aqlZu7cow8[/embedyt]

Internal Struggles Within the Group

While the groups success continued onto the 80’s, personal issues, and ego began to tear the group apart. In 1984 Ernie, Marvin and Jasper left the group to start their own group. Ronald was convicted of tax evasion, and seated to prison; and Marvin need up passing away due to diabetes.  Although the band went through many ups and down they still forged on, in one form of another throughout the 90s and even made the transition to “baby making” music in the early 2000s.

Recent News of the Group

It wasn’t until 2017 that the Isley Brothers got reunited to record again with Carlos Santana and his wife, jazz drummer, Cindy Blackman Santana. They joined Santana on tour, and even record covers with the legendary guitarist.

The Isley Brothers leave behind a career that spans decades of genres, social climates, and internal ups and downs. The group managed to create a sound and image entirely their own that will outlast most of the groups they originally came onto the scene with.