The Road to Justice and Equality: The influence of the Negro Spiritual 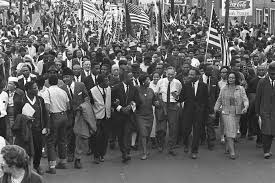 The Negro spiritual was known to be the earliest form of religious music amongst African Americans in the United states. These spiritual songs continued to flourish in the south until the abolishment of slavery.  The birthing of the spirituals gave slaves in the south a sense of unity and freedom to express themselves, which was something they were not permitted to do at the time.  As America transitioned from the abolishment of slavery and into the civil rights movement, elements of the spiritual still played a major role in African American communities and society. The Negro Spiritual heavily impacted the Civil rights movement by showcasing a personal way of expressing the oppression in which African Americans were facing, while also creating unity in order to evoke positive change. 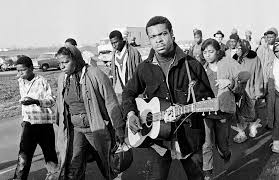 The Beginning of the Spiritual

Over the years of enslavement, African communities within America were introduced to Christianity.  The Biblical stories contained likeness to their personal struggles and oppression which as a result Christianity took over most of the slave populations in America. In conclusion, the spirituals were a way of expressing the slave’s new faith along with their new perception of hope under their current circumstances. The structure of the Negro Spiritual included call-response elements, along with repetitiveness and music patterns. These were usually sung outside of churches and referred to messages from the bible.  Examples of some popular spirituals include “Go down Moses” and “I be So Glad When the Sun Goes down.

The intention of the Civil rights movement was non-violent fighting for social justice and change. The civil right movement spanned from the 1950s- 1960s where ideas such as sit ins and peaceful protests were constantly being thought of and changed in order to evoke social change. However, one thing that remained stagnant, was the focus of the church during this period.  When learning about the civil rights movement, there is complete understanding that the church was the focal point during this era.  It allowed a safe place for people to meet and share ideas, while also using prayer and music as a means of creating communities.  This implementation of the spirituals allowed for a sense of hope during this fight for freedom, motivation during large marches, and unity during meetings for African Americans at the time. 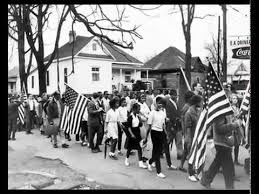