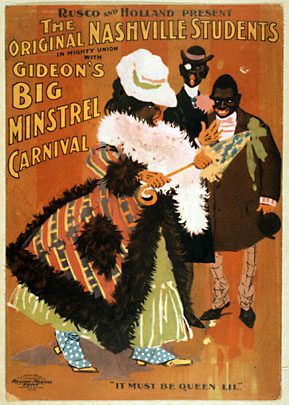 Blues music played and continues to play a big role in the expression and preservation of the African American narrative. Black people have used Blues to express struggle, pain, desire, and hopes all contributing to the imagery of the Black society and Black people still present in today’s society. The role of minstrel shows played an interesting part in Blues music as a whole, specifically the perception of Black People.

Minstrel shows profited off of the exploitation of stereotypes related to Black people. For that very reason, it is no surprise that Black men were mocked and belittled through minstrel shows. With the creation of the film Birth of a Nation in 1915, the portrayal of Black men in society was as drunk, lethargic, violent vagrants. Minstrel shows played off of this stereotype by having white men dress in Blackface and interrupt songs with large barbaric movements and gestures. Although problematic, it was commonly known in the Black community that actual Black men were nothing like how they were portrayed in these shows. Black men were in fact musicians and performers, in the background of shows filled with people making a mockery of them. The role of Black women in these acts was simply to provide a pretty sound and a pretty face/body to match. In Blues, Black women often sang about sex to intrigue the predominantly white audience. Blues music and minstrel shows perpetuated the idea that Black women, their lives, their bodies, and their voices were for the consumption of others. Black women such as Bessie Smith, Ma Rainey, Mamie Smith, and Sister Rosetta Tharpe are a few examples of Black women, extremely talented and diverse, who were exploited and objectified through Blues.