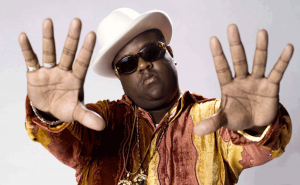 Christopher George Latore Wallace, The Notorious B.I.G. or commonly known as Biggie Smalls, was born on May 21, 1972 in Brooklyn, New York. His father left when he was two years old and his mother, Voletta Wallace, worked two jobs to support him. He attended private school and was a very good student. Unfortunately Biggie began selling drugs at age 12 without is mother’s knowledge. At 17 he dropped out of school and was arrested and given five years of probation for carrying a weapon. A year later Biggie was arrested and sentenced to nine months in jail for selling cocaine.

After he got out of jail, he recorded a demo that was heard by a producer names Sean Combs. On March 1992 he was signed to  Uptown Records A&R but followed his producer to his new labelBad Boy Records. His albums “Ready to Die” and “Big Poppa” were nominated for multiple grammy awards.

Biggie Smalls died on March 9, 1997. He was shot to death while being stopped at a red light.