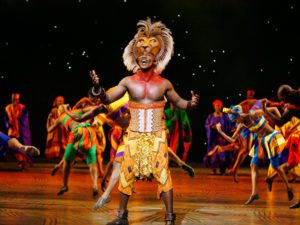 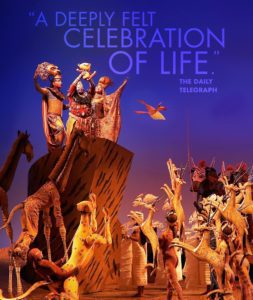 This Broadway focuses on the life about a young lion who must reclaim his kingdom from the clutches of an evil uncle. This is one of the best broadways. It is the winner of six 1998 Tony Awards, including Best Musical, and is currently the third-longest-running Broadway musical of all time. The Broadway was full of a lot of comedy and is very age appropriate for young children. This Broadway had opened up for shows since 1997 and is still on Broadway today.

Musical genres: The music was directed by Elton John and Tim Rice. It has a lot of African traditional music in it. The music has elements from the genres of Folk, Negro Spirituals, and Soul. Another song that is played during this play is Can you feel the love tonight this song in particular is of the pop genre.

This Broadway was at the Minskoff the theatre in New York. There was a huge cast of people in the play. Jason Raize as Simba, John vickery as Scar, Samuel E Wright as Mufasa, Heather Headley as Nala, Tsidii Le Loka as Rafiki, Max Casella as Timon, Tom Alan Robbins as Pumbaa, Geoff Hoyle as Zazu, Tracy Nicole Chapman as Shenzi, Stanley Wayne Mathis as banzai, Kevin Cahoon as Ed, Gina Breedlove as Sarabicott Irby-Ranniar as Young Simba

Kajuana Shuford as Young Nala, Julie Taymor was the Director, Roger Allers and Irene Mecchi was the Book, Elton John used for the Music, Tim Rice for the Lyrics

The Lion King Broadway takes the place of the Disney animated movie The Lion King. The animated movie is a young cub name Simba who is born to Mufasa. Mufasa is the King with the current reign but Scar wants to take over the reign, so he kills Mufasa but tricks Simba into thinking he killed his father. Scar does this so that Simba could leave the kingdom and Scar would rule the thrown for himself. The plot of this story line is to get Simba to come of age and take back the thrown from Scar. The Broadway imitates this story line in the best way.

Educated opinion on it

I feel as if this was a very good play. I can understand why it remains one of the best plays for so many years because it is truly organized and well put together. I think what makes this play so good is the instrumentation, the people singing along with it, and how well the story line imitates the animation. Although I only watched it online I feel as if I was there in person. The cast made me feel like I was a part of the audience that was present for that show.

The music was very well organized in this play. It sounded as if everything was on one accord.  The instruments used in this play was the African percussion (bongos, drums), tambourine, triangle, timpani, tuba, trumpet, accordion, wooden xylophone, violins.